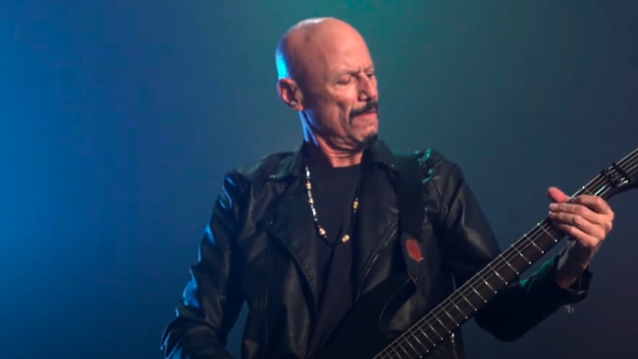 Members of KISS, SONS OF APOLLO, KINGDOM COME, FIREWIND, FOZZY and ALCATRAZZ are among the rockers who have reacted on social media to the passing of legendary guitarist and record producer Bob Kulick.

Kulick died Thursday (May 28) at the age of 70. His passing was confirmed by his brother, former KISS guitarist Bruce Kulick. A cause of death has not been revealed.

Bruce posted the following message on social media: "I am heartbroken to have to share the news of the passing of my brother Bob Kulick. His love of music, and his talent as a musician and producer should always be celebrated. I know he is at peace now, with my parents, playing his guitar as loud as possible. Please respect the Kulick Family's privacy during this very sad time."

Throughout his 40-plus-year music career, Bob Kulick has worked with an astonishing array of artists: from Meat Loaf to MOTÖRHEAD; from KISS to Michael Bolton; W.A.S.P. to Diana Ross; as well as legends such as Roger Daltrey, Alice Cooper, Lou Reed and Paul Stanley's first solo LP and tour.

We are heartbroken. Our deepest condolences to the Kulick family in this difficult time. https://t.co/QH049xTSvG

I am heartbroken to have to share the news of the passing of my brother Bob Kulick. His love of music, and his talent as a musician and producer should always be celebrated. Please respect the Kulick Family’s privacy during this sad time. RIP pic.twitter.com/LUWC6k69Ml

Oh Man..This Is Awful! R.I.P. #bobkulick Ty for all the love u always gave me & us!!! We all will miss you my brother! Thoughts & Prayers to the Kulick Family. We all loved Bob so much! Mt🙏🏽😪✝️ pic.twitter.com/Uf1Sw4FvUF

OMG...I am sooo sad to hear of the passing of Bob...he was a great human and an incredible talent and musician ...damn!

R.I.P. Bob Kulick. I had the pleasure of working with him on a Randy Rhoads tribute album a few years back. My condolences to his family and loved ones pic.twitter.com/Gk5aiWSlzT

Ugh, another peer, colleague & someone I considered friend has passed. I worked with Bob Kulick on many recordings through the years, most notably the many tribute albums he produced.

My condolences to his brother Bruce and extended Kulick family.https://t.co/8Snr5tRwUG

I am very sad to hear about the passing of Bob Kulick. I played on several tribute records in the 90s that Bob produced. My condolences to his family and especially Bruce. R.I.P. #BobKulickRIP :( pic.twitter.com/xlo3OCjxZP

we lost a great one...
bob kulick has tragically left this world. a fun & kind dude who was one hell of a talent. condolences to the kulick & kiss families - riff in peace. pic.twitter.com/I7BajVuTwk

Totally shocked and saddened to hear of the passing of guitarist, producer and long time friend Bob Kulick. Here we are hanging at Raiding The Rock Vault in November 2019. Safe travels my brother. 🙏🏻🌟 @Rock_Vaultpic.twitter.com/ur7DgPIj93

We are very saddened to learn of the passing of our friend and former bandmate Bob Kulick.
As most know, Graham and...

Sorry to hear about the passing of the legendary @bobkulickmusic. I’ve known #BobKulick for 15 years and had the pleasure of working with him three times on a few of his famous “All Star Tribute” albums. Bob brought a lot of people together and gave them a lot of joy with his music and I will spend the rest of the day listening to his work! @paulstanleylive @kissonline #Meatloaf @officialmotorhead @dianaross @michaelboltonpics

Sad to hear the news of Bob Kulick passing. I knew him and we worked together a few times. In fact, some time ago, I was going to call a band 'Skull' until Bob beat me to it!! Rock in Peace Bob pic.twitter.com/x7XvoBPn0q