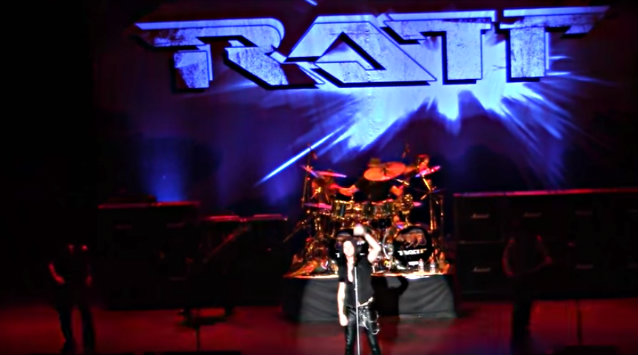 Says Blotzer: "We have some leaving, and new great musicians coming on board .

"Stacey Blades [L.A. GUNS], my longtime friend, just played with us on two huge festivals over last weekend and did a fabulous job. Also sitting in through next week's shows on bass is Todd Kerns [SLASH FEATURING MYLES KENNEDY & THE CONSPIRATORS]. He is such a great talent; Slash is lucky.

"Starting September 3rd and 4th onward will be the great Mitch Perry on lead guitar, Stacey Blades [on] rhythm and leads, and Brad Lang on bass, along with the awesome Joshua Alan still fronting, of course, and yours truly chopping wood behind the kit.

"All these guys are long time road veterans from very well-known lists of bands. We're definitely looking forward to playing with them.

"The shows over the weekend just as always is a testament that people love RATT music as performed by us with our intensity, and with great replication emphasis on the integrity that RATT music be treated with. 35,000 people in Sturgis going nuts Thursday then last night 10,000 going crazy at our performance full set, at Rockin' The Rivers festival was epic. It never gets old!"

Crane announced his exit from RATT last week, explaining in a Facebook post that it was "time for [him to] move on and focus on the positive things in [his] life."

Ellis confirmed his departure from RATT earlier today, writing: "Bob, thanks for the opportunity to the play the songs for the people that wanted to hear it… something I will never forget."

Blotzer earlier in the month hinted at trouble in the RATT camp, telling ClassX Radio: "We are a great band, that's all I can say. I'm so proud of us, you know. But I also wanna see people having their act together on every level. That includes me, too. Nobody's immune from the… from what we've gotta do out there.

"I'm doing all the work behind the scenes, and these cats, all they've gotta do is show up and do their part," he added.

"They'd better grow up real quick here, because there's a lot of sailors out there that would give their leg to go out on this ship."

Blotzer also defended his decision to go out on tour as RATT without any other original members of the band, explaining that fans just want to hear the music performed the way it was recorded on the group's albums.

"No matter what, this band plays so good and does such great integrity to the music of RATT," he told ClassX Radio. "That's why everybody's been hired. The singer just blows Stephen Pearcy out of the water at this day and age. And frankly, [he sounds better than Stephen did] even when we started out."