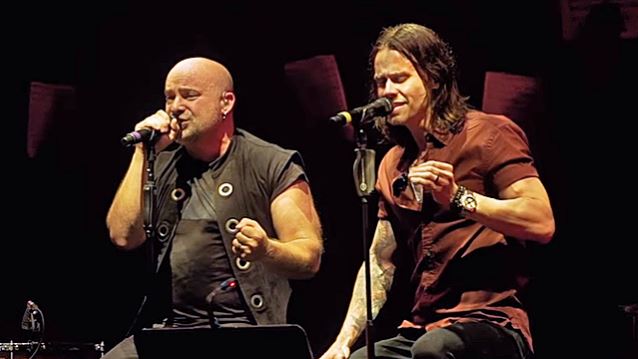 DISTURBED was joined by Myles Kennedy of ALTER BRIDGE for a performance of SIMON & GARFUNKEL's "The Sound Of Silence" during last night's (Saturday, August 13) concert at Cynthia Woods Mitchell Pavilion in Houston, Texas. Video footage of his appearance can be seen below.

DISTURBED version of "The Sound Of Silence" has been a huge hit for the band, with Paul Simon sharing his approval of it publicly after watching the band perform the song on "Conan" and also exchanging e-mails with singer David Draiman.

DISTURBED's record label, Warner Bros., credited the song's popularity to the video for "Silence", which was released in December 2015. To date, the clip has been seen almost 90 million times, a record number of views on YouTube for the group.

Draiman told Philadelphia radio station 93.3 WMMR that the band has been "blown away" by the response to its version of "The Sound Of Silence". He explained: "We're pretty blown away — and surprised, to be honest — by the amount of positivity that has surrounded the cover. Because it was definitely a left turn, and it was something that, to be perfectly honest, I wouldn't have intended to go to, stylistically, on my own."

Draiman said that it took him three hours to record the vocals for the song — the longest vocal session of his career — and recalled hearing it three days later. He explained, "[I] was kind of tearing up listening to it, because it had been so long since I have allowed myself to go to that place vocally, and hearing it, and hearing it come out as well as I thought it did was not just gratifying, but like having a weight lifted off me."

"The Sound Of Silence" is taken from DISTURBED's sixth studio album, "Immortalized", which was released in August 2015.