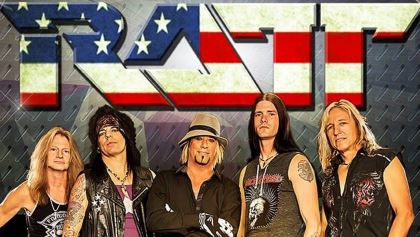 The first official photo of the new lineup of Bobby Blotzer's RATT can be seen below.

Asked why his version of RATT has already undergone so many lineup changes in the past year, Bobby told the SiriusXM satellite radio show "Eddie Trunk Live": "[It's] hard to say. I think it started way back when we first came from [Las] Vegas with those guys, and we had this very unsavory guy that kind of corralled them, in my opinion… Some of these guys are really young; the lead guitarist was really young and impressionable. And there was colluding going on, a lot of colluding, and there was a lot of politicking. And I don't wanna name any names, but there was things of that nature going on."

He continued: "We've never had a fight in this band, we never have ever had an argument; we don't even disagree. So for me to find out, while we had a four-show run that started out in Louisville, then Cincinnati, then Wabash, Indiana, and then finishing the week in Detroit, I find out after the Cincinnati show that the lead guitar player is quitting; he's joining a country band and he's just out. And I'm, like, 'Ooookay.' And in the next week coming up, obviously, there [were] some giant shows…. I had to scramble, with a two-day notice, to either get somebody — which I didn't know who it was gonna be… I was pretty freaked out that out of the blue this guy is just quitting without telling me. And we finished the shows and subsequently got Stacey. He learned the set, an eighteen-song set, in two days, and came out in front of 35,000 and ripped it up. And we had Todd Kerns, who was filling in for Robbie Crane. And we knew that Todd was only out there for those specific shows.

"One of the guys in the band said from the get-go he doesn't wanna be on the road, even though he was having a great time. Even though I have texts from these guys saying, 'Thank you for bringing me aboard here,' and these are recent texts. And I respect a couple of these guys at this point. And when they're thanking me, I'm, like, 'Thank you for playing up there. You have helped build this thing, like we're building it right now. You're doing your job.' But the lead player split after Detroit. Stacey came in and did the gigs, like I said, and right now… I had so much e-mails and phone calls from guitar players and singers and bass players, it was insane. I'm, like, 'Fuck! How am I gonna get through all this?' So I just started thinking about personal friends. Mitch Perry and I go way back. Him and Sean McNabb and I had a band with Ralph from STEEL PANTHER back around '90, '92, something like that. So I called Mitch — great guitarist — and I said, 'Here's the deal.' And he's, like, 'Great! I'm in.' And then we were thinking, 'Okay. Bass player. Who? This person, that person.' And he came up with Brad Lang, who's a friend of his, and I had jammed with Brad at New Year's Eve in San Francisco for Phil Kennemore's memorial show that they did up there. And he's a great player and a great guy, he's got stage presence. And you know what? These guys are seasoned pros. I'll miss one of the guys that were in this band, but, you know, the knives that were just thrown into my back, dude, I'm just never gonna get over; they're never gonna stop bleeding."

Blotzer defended his decision to go out on tour as RATT without any other original members of the band, explaining that fans just want to hear the music performed the way it was recorded on the group's albums.

"No matter what, this band plays so good and does such great integrity to the music of RATT," he told ClassX Radio. "That's why everybody's been hired. The singer [Josh Alan] just blows Stephen Pearcy out of the water at this day and age. And frankly, [he sounds better than Stephen did] even when we started out."

Blotzer is involved in a legal battle with Warren DeMartini over the rights to the RATT name, with the guitarist filing a lawsuit last fall claiming that the drummer was falsely advertising his "tribute band" as the real thing. That dispute is still pending in California state court.

Fan-filmed video footage of the new lineup of Bobby Blotzer's RATT performing on September 4 at Goodyear Theater in Akron, Ohio can be seen below.