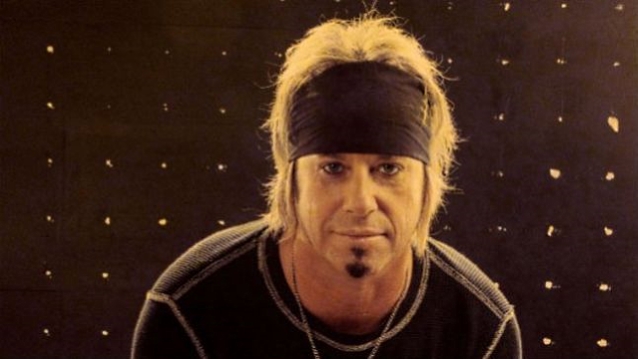 BOBBY BLOTZER Says He Doesn't Know What His Next Musical Project Will Be, Confirms He's 'In Love With A New Lady'

Original RATT drummer Bobby Blotzer says that he doesn't know what his next musical project will be.

Blotzer has spent the last few years battling with his former bandmates over the rights to the RATT name.

Starting in late 2015, Blotzer spent about a year and a half playing shows under the name RATT with a lineup in which he was the sole member from the band's '80s heyday. The drummer's efforts were met with legal challenges by singer Stephen Pearcy, guitarist Warren DeMartini and bassist Juan Croucier, who objected to his use of the RATT name, referring to Blotzer's version as a "cover band."

During an appearance on the latest episode of the "Rock Talk With Mitch Lafon" podcast, Blotzer said that he has not yet figured out his next musical move.

"I don't have to go back out and work to survive and live — thank God," he said (hear audio below). "But every night, I have dreams of being on the road. I call 'em 'RATTmares,' frankly. It's the same shite every night, dude. It's, like, I'm trying to get to the stage, or we're lost on the tour bus, or my drum sticks are linguini and the cymbals are falling over… RATTmares — that's the best way to put it. But I'm dying to play. It feels good to sit in with bands and play. I've been doing it since I was 14, so I just hit 60 last October. So I put in my gold watch-garnering time. I don't know. It depends on what makes itself available to me. Do I wanna start a new band and go through that whole rigmarole? I don't know. I just haven't decided yet."

"We're just getting ready to have a conversation about that," Bobby said. "It's something me and Keri individually talked about and then, of course, bringing Crane into the thing as… It [would be] a side project for everybody. Those guys are out with their bands, and they always keep busy. I've just hidden from this thing. This whole thing has affected me so negatively over the years. '16 was the last tour I did, so I've been off '17, '18. Now this summer, if I don't get out there, it's three years. Not a long time, but it feels like 13 years. And I'm itching to play, but I'm not itching to be away from my house. I have a great house and property that's kind of like 'Pirates Of The Caribbean', so it's badass at night and day. I love my woman, my dogs… I don't know… I can't figure out what I'm doing yet. I just don't know."

Bobby also confirmed that he is going through a divorce with his second wife. Michelle Blotzer and Bobby got married in 2013 and have no kids.

"My first wife, Jenni, and I [got together in] sixth grade and lasted 30 years. [Fifteen years later] I got married to this girl Michelle. And sadly, it didn't last the test of time. A lot had to do with [the RATT] lawsuit, in my opinion. It's in its fourth year right now, and having to hear it nightly and daily, it's wearing — it's definitely wearing. And it's hard not to express that. You've gotta unload what's in your stomach, your gut and your brain when you're going through this, and it's gonna beat up on any marriage."

Blotzer continued: "Her and I are gonna be legally divorced probably in about three or four months — something like that. But I'm in love with a new lady, and I won't discuss her situation here. She's got a couple of children I'm crazy about too, and we're just having a good time."