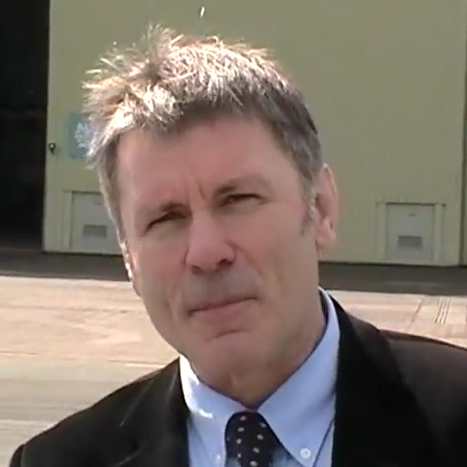 According to Barry & District News, the first piece of equipment into the hangar at St Athan is a Boeing 747-200 flight simulator. The B747 is one of the world's biggest aircraft and the simulator will be used to train experienced pilots undergoing annual refresher training, as well as pilots new to professional aviation.

Dickinson, who currently trains pilots on a variety of aircraft flight simulators at other U.K. locations, said, "This is a big, serious piece of kit which involved a police escort on oversized trucks to transport it from the Gatwick area where it had previously been used to train pilots flying Virgin Atlantic's Boeing 747s. It is now being installed in our St Athan HQ Ð known as Twin Peaks Ð and we already have agreements in place for training and type-rating courses from the day the simulator comes online, with pilots and students coming not just from the U.K., but from around the world."

Footage of Dickinson giving a short video tour of Cardiff Aviation can be seen below.

Cardiff Aviation will maintain airliners and other large aircraft for major and independent airlines. It will also have facilities to complete the full range of ancillary aircraft maintenance and training activities and has the expertise and approvals to certify aircraft from many jurisdictions, including the USA.

Commented Dickinson: "We've had fantastic support from the Welsh government — we've been impressed by how pro-active they've been; they've really wanted to make this happen, and we've experienced a level of enthusiasm and drive that has been a delight to behold.

"We're coming into this enterprise with the knowledge that we'll also be bringing business to South Wales — a cautious projection is that we'd expect to create up to a thousand jobs within 18 months based on the level of interest and commitment from aircraft manufacturers and operators. South Wales has long had an association with the aircraft industry and I am delighted that I am able to play a small part in the continuation of that tradition.

"We expect to announce the names of our first clients in May, and we're also currently dealing with expressions of interest from several more major and independent airlines.

"We'll be based in civil aviation buildings, and we're excited to be part of the Welsh Government's Aerospace Enterprise Zone proposals. As an established base, it obviously has all the facilities necessary for the enterprise, including a runway 6,000 feet in length with a Cat 1 DME ILS, meaning it can cope with practically any size of commercial aircraft, including wide-bodied airliners.

"But the added value we can bring to the package is that while the team is expert in the provision of technical services, we also have expertise in aircraft sourcing and leasing, another key aspect to the deployment of a total aviation services package, hopefully including the development of new airline services for South Wales — Cardiff Airport has tremendous potential to challenge the successful English regional airports."