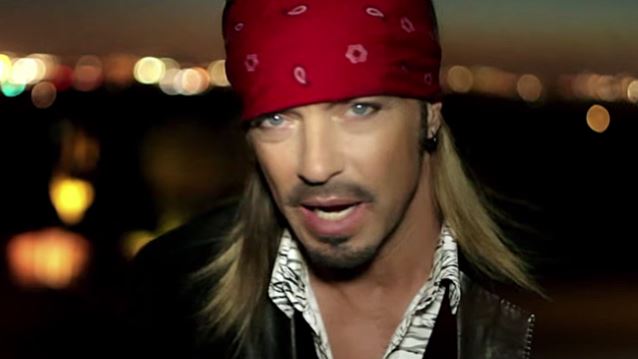 POISON singer Bret Michaels called in to Washington D.C.'s country station 98.7 WMZQ to talk about his newly released rock-and-country-crossover single, "Girls On Bars". You can listen to a clip of his appearance below.

Regarding his interest in country music, Michaels said: "Let me just say this with full, undisclosed… everything here coming out… I'm putting the cards on the table… We know, and I've talked about this a lot, I said, throughout my entire career, whether it's POISON or solo…. and it's really simple: I grew up loving music that you consider what's classic rock and country. They call me the 'crocker rocker' now for my love of classic rock and country, right?! So I headline these festivals now with Lee Brice, and I've been on stage with Kenny Chesney… We did… If people get a chance to go to YouTube, look at this: go to Bret Michaels and Kenny Chesney singing 'Every Rose Has Its Thorn' at the stadium, and the entire stadium… We stop playing it acoustically, and the entire stadium sings it of sixty thousand people… It's insane!"

He continued: "Here's what's great… My love of southern rock, of country… You know, my dad, again, played pedal steel guitar, and I learned to play the harmonica first. But I said country music is just great music, and if anything, it's a great attitude, it's a great life."

"Girls On Bars" was co-written with Michaels' good friend and fellow Pennsylvanian Luke Laird, who is a Grammy Award-winning songwriter of hits like LITTLE BIG TOWN's "Pontoon", Eric Church's "Talladega" and Luke Bryan's "I See You"."

"Girls On Bars" is the first single from Bret's upcoming album, "True Grit", featuring 21 new and classic Michaels hits, including POISON classics "Nothin' But A Good Time", "Something To Believe In" and "Every Rose Has Its Thorn". Released on May 5, the CD features guest appearances by Jimmy Buffett, LYNYRD SKYNYRD's Gary Rossington and Rickey Medlocke, Rascal Flatts and Loretta Lynn.

"'True Grit' is an entire history of where I've been," Bret told Billboard.com. "It's my past, my present, and my future. We've got Loretta Lynn singing on 'Every Rose Has Its Thorn'. We recorded it on her ranch outside of Nashville and she nailed it.

"'True Grit' is really a record of just taking songs like 'Nothin' But A Good Time' and re-making them from the catalog of my past, and then my present, and then my future. Songs like 'App Song' and 'Get Undone' that are going to be on this record are a taste of what will be coming in the future along with 'Girls On Bars'. I never ask for a 'gimme.' Never. All I ask for is a chance. And that's what country music does. It gives me a chance to have a new hit, as well as play my catalog."