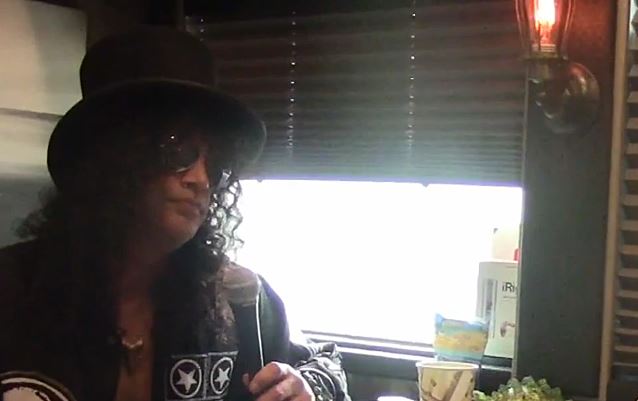 SLASH: Why We Don't Perform New Songs Live Before They Are Officially Released

Loper and Randi of the Columbus, Ohio radio station 99.7 The Blitz conducted an interview with legendary guitarist Slash at this year's Rock On The Range, which is being held May 15-17 at MAPFRE Stadium (formerly Crew Stadium) in Columbus. You can now watch the chat below.

Speaking about why he is reluctant to perform new songs live before they are officially released, Slash said: "Unfortunately, as great as the digital age, in some ways, can be, one of the reasons we don't do new material live anymore is 'cause it'll be online before the show is over. And you can't really release material that way unless you really intend to do that."

He continued: "Rock music has always been something that was bootlegged. I mean, I used to buy bootlegs, and it was great. But now, what happens is it goes online and everybody shares it and it just goes out really quick. And it just lessens the blow… It's not even the money thing for me… It just lessens the blow of the material when it actually comes out. Sometimes the recording quality is really diluted, this and that and the other. So if it's gonna be that widespread, you've gotta really know if you wanna release it that early or not."

Slash and his band FEATURING MYLES KENNEDY AND THE CONSPIRATORS are currently in the midst of a U.S. headlining tour. The month-long trek — encompassing headlining shows and festival appearances — is the first solo trek supporting the group's acclaimed studio album, "World On Fire", which is Slash's third straight solo album to debut in the Top Ten in the U.S and the second album with his official band THE CONSPIRATORS which features Myles Kennedy (vocals),Brent Fitz (drums),Todd Kerns (bass) and Frank Sidoris (touring guitarist).