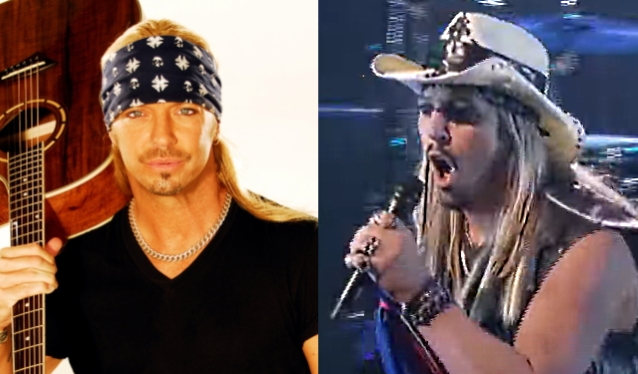 POISON singer Bret Michaels has a heart of gold. After watching E! network's "Clash Of The Cover Bands" (Wednesday, December 1),Michaels made sure the POISON cover band SHOT OF POISON, who lost to a DEPECHE MODE cover band, went home with more than nothing, but a good time. Michaels invited SHOT OF POISON to join him on stage for one of his upcoming solo shows.

"For all your hard work and dedication to making a POISON show look incredible and everything that you do, I want to invite you on stage to a Bret Michaels show, and we will do 'Nothin' But A Good Time' on my 'Nothin' But A Good Vibe' tour," said Michaels via a Twitter post.

"They play great live music and I love the energy they brought to 'Clash Of The Cover Bands'," he added.

"Thank you for the shout-out, and we'd be HONORED to play 'Nothin' But A Good Time' on stage with you during a stop on your upcoming 'Nothin' But S Good Vibe' tour," SHOT OF POISON responded.

SHOT OF POISON is a group of talented, veteran, local rock musicians and innovative musical businessmen who've created a top-shelf tribute to the 35th anniversary of the greatest, hard-rocking, glam-slam party band ever — POISON. SHOT OF POISON's full intention is to bring audiences the look and sound they expect, to make the best modern-day POISON experience in the world.

E! 's "Clash Of The Cover Bands" pits two cover bands head to head for a chance to win $10,000. The series airs on Wednesday evenings on E!

While preparing for POISON's upcoming stadium tour, which begins on June 16 in Atlanta, Georgia, Michaels has many projects, including select solo performances, private engagements, a development deal, and several documentaries in the works.

Omg THE legendary @bretmichaels sent tonight's performer @ShotOPoisonBand a message of good luck! If this isn't the best way to celebrate a new #ClashOfTheCoverBands, I don't know what is! 🤩 Join us at at 9:30/8:30c on E! pic.twitter.com/jSzzEfJXOs

@bretmichaels is the coolest dude in rock & roll! Thank you for the shout-out, and we'd be HONORED to play Nothin' But a Good Time on stage with you during a stop on your upcoming Nothin' But a Good Vibe Tour. Happy Holidays to you and all! Thanks @eentertainmentpic.twitter.com/9xP3kzGQS1