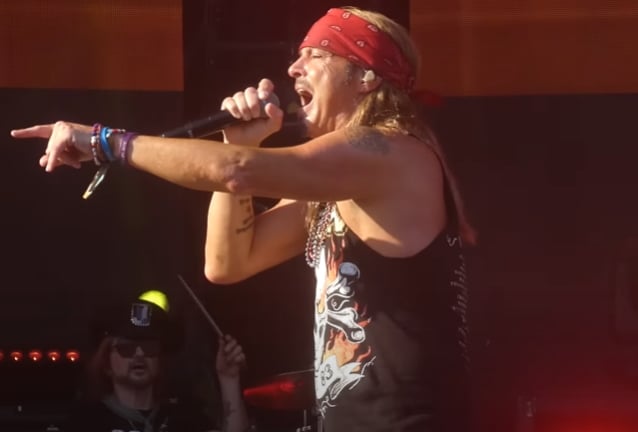 POISON frontman Bret Michaels has vowed to give it his "all" when he and his bandmates perform tonight (Saturday, July 2) at the Jacksonville, Florida stop of "The Stadium Tour".

The 59-year-old musician was hospitalized Thursday (June 30) in Nashville just before POISON was set to perform with DEF LEPPARD, MÖTLEY CRÜE and JOAN JETT & THE BLACKHEARTS.

Bret's bandmates came onstage to let concertgoers know that Michaels had suffered a "bad reaction to medication" and that they wouldn't be able to do the show without him.

Earlier today, Bret — who is set to take the stage with POISON at TIAA Bank Field in a matter of hours — released the following statement via his social media: "To all my friends in Jacksonville,

"In light of my recent medical situation & treatment, I'm very excited to try to attempt to bring all the positive energy, vocals and give you all I that I have on stage tonight. I promise, as always, to do the best I can and to give you all I got.

"As for the awesome POISON meet & greet, you know I always give 1000% both during the meet and greet and on stage. Doctors have highly recommended that I continue to rest and try to save all the energy I can for the show. Therefore I will not be able to be at the meet and greet this evening. I encourage you to go see the other guys and enjoy the meet and greet.

"Thank you for all your well wishes and understanding. Florida, you know I love you."

Earlier in the day on Thursday, POISON announced that it was canceling the VIP meet-and-greet with members of the band in Nashville "due to COVID positive cases within the POISON touring party". Not long after, it was announced that POISON was scrapping its appearance at the concert altogether.

"The Stadium Tour", which was originally planned for 2020 and later moved to 2021 and then to 2022, will conclude on September 9 in Las Vegas, Nevada.