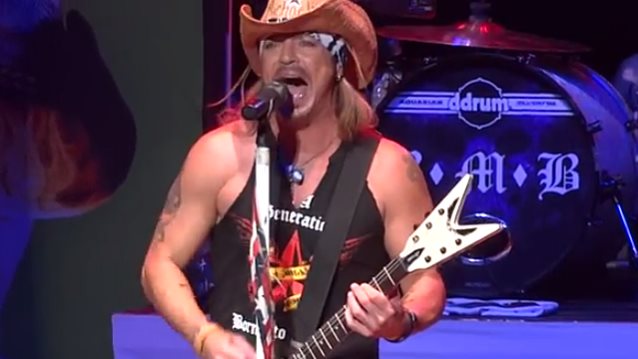 BRET MICHAELS Will Not Perform In Albany Tonight

POISON singer Bret Michaels was forced to leave the stage this past Thursday night (May 29) during his solo concert at the Palace Theater in Manchester, New Hampshire due to complications involving insulin shock and severe low blood sugar, along with other conditions which doctors later determined included exhaustion, dehydration, fever and the noro flu virus.

Under strict medical direction, Michaels was not able to perform yesterday evening in Wilkes-Barre, Pennsylvania as doctors ordered him to let the flu virus run its course and let his blood sugar rebalance and remain consistent.

"I'm sorry to announce that Bret will not be performing in Albany, New York today.

"As I've stated before, I have stood with Bret for over nine years and have been around the world with him. I was there when his appendix burst, was there through the brain hemorrhage and watched him re-learn to walk and talk, not to mention countless blood sugar scares, but nothing like this. The complication of this brutal flu virus and how it has affected his blood glucose levels has been awful to watch. The perfect cocktail of such a virus along with diabetes and a high temperature is to be taken very seriously.

"Today even more so than yesterday, it took a team of doctors, friends and family to convince Bret to not return to the stage. He doesn't believe it's the right idea, but those close to him, along with all of you, I'm sure, would rather have him miss one more day and then take the next few days to recover rather than to cause more problems by pushing himself, right?

"From my point of view, most non-diabetics take a week off work when they contract a flu like this, so two days is still pretty crazy. I have no doubt he will be up and running at 100 percent soon.

"We will certainly be in St Louis next week at Jefferson Barracks Veterans Memorial Amphitheater to continue the party. Until then, thank you all for your well wishes and support. We've all made sure Bret's received them all and he is both thankful and grateful."

According to WebMD, noroviruses are a group of viruses that cause inflammation of the stomach and large intestine lining (gastroenteritis); they are the leading cause of gastroenteritis in the U.S.