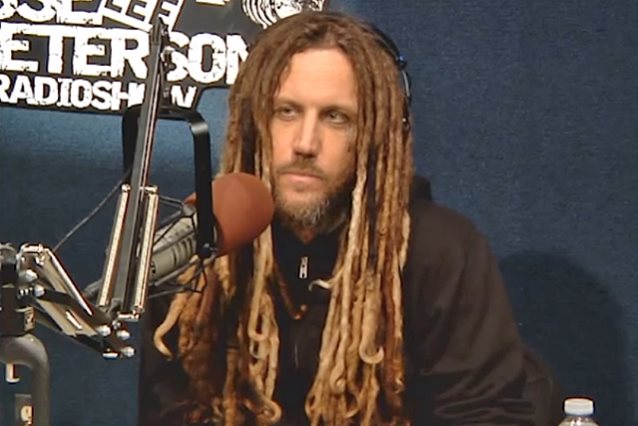 KORN guitarist Brian "Head" Welch was interviewed on a recent episode of "The Jesse Lee Peterson Radio Show". You can now watch video footage of his appearance below. A couple of excerpts follow (transcribed by BLABBERMOUTH.NET).

On why he ended up doing drugs:

Welch: "I think people that do drugs and get addicted, I think there's an emptiness inside of 'em and they're trying to fill it. Now that I know… Not to get overspiritual or nothing, but I'm not supposed to be comfortable here, because this is the world and it's passing away. So I was trying to escape outta here by a way that I knew, and that as to buy drugs and everything. And as soon as I felt God, that was my true… 'cause He's my true home. I was trying to find my home with drugs. I was trying to find myself, and it just wasn't happening, and it was ruining myself."

On how bad his drug abuse got:

Welch: "Oh, pretty bad. The first time I tried marijuana, I was eight years old in Torrance. My friend's brother smoked it, and he had all these roaches in his ashtray, and so me and my friend tried smoking it one day. And then I tried weed once or twice during my teenage years, so I made it through my childhood with only a couple of times. And then it got pretty bad when I turned into my 20s. For some reason, the guys I grew up with started using meth, and I started doing that once in a while, but I was, like, 'Okay, I can control it. I'll just do it this weekend [and then] I won't do it for a little bit.' And then when I got in KORN, they were, like, 'Free alcohol, free this, free that.' And then, you know, drug dealers started showing up to the shows, and then we started doing coke once in a while. So it was, like, coke and meth. And then we started to realize that we can get prescriptions written for us. They call 'em 'rock doctors.' They come out on the road and they give you… They give you legitimate stuff — medicine for when you're sick — but if you say, 'I'm having anxiety,' they'll start writing you prescriptions, Xanax. 'Oh, my back hurts from playing.' Vicodin…"

On whether his KORN bandmates accepted him as a Christian after he returned to the band:

Welch: "Yeah. Totally! We're just, like, so close, and everybody's real humble. And it's just the opposite from when I left. There's another guy in the band; he found Christ too. I think everyone [in the band] believes in God. Two of us are Christians, and the others are just… I think they're searching, and they've got their own thing going on. But everyone's just humble and just trying to love each other. Yeah, it's really crazy. It's awesome. [In the old days] we were always fighting and it was always about pride and all this. And now everyone's, like, 'Oh, man, whatever you wanna do. You wanna have wine after the show? Have a couple of glasses. Let's hang out. If you wanna go tell people about Jesus after the show, go do that. Whatever makes you happy.' [Laughs]"

Welch's new book, "With Eyes Wide Open: Miracles And Mistakes On My Way Back To Korn", aims to reveal what a wild ride his life has been (so far). It is a follow-up to best-seller 2007's "Save Me From Myself", which delved into details behind Welch's decision to leave KORN and embrace Christianity.

"With My Eyes Wide Open" was made available on May 17. Thomas Nelson is the publisher.