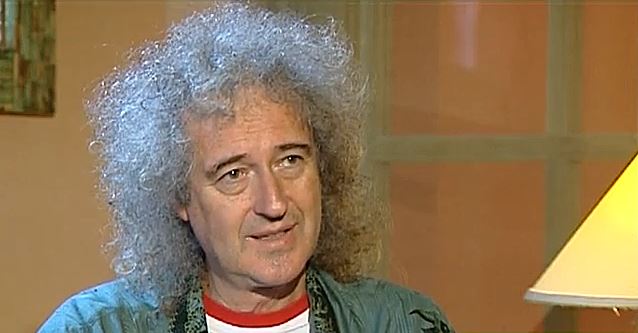 BRIAN MAY Hints At New FREDDIE MERCURY And QUEEN Album

According to The Pulse Of Radio, QUEEN guitarist Brian May has revealed that there seems to be enough material for a second posthumous QUEEN/Freddie Mercury collection. In 1995, May, Roger Taylor, and retired bassist John Deacon overdubbed Mercury's final piano and vocal recordings to create the band's 15th — and final-four man QUEEN album — "Made In Heaven". In addition to some of Mercury's 1983 demos with Michael Jackson, other "lost" Mercury tracks in the QUEEN vaults include collaborations with David Bowie, Andy Gibb, and Rod Stewart.

May was quoted by Vintage Vinyl News as saying, "We thought we'd exhausted everything that was around and could be worked on, but since then a number of things have come to light from various sources that we'd just plain forgotten about, including the stuff with Freddie and Michael Jackson. Just a couple of weeks ago, we thought: Maybe we shouldn't be just working on bits and pieces? Maybe we should be heading towards an album? It just might be."

Shortly before his death, Freddie Mercury explained that the variety of having multiple songwriters is what made QUEEN's albums so interesting. "I think this is one of the few groups that all four members write," he said. "In a funny way, when we do a QUEEN album, they're like four solo projects within themselves anyway; 'cause, I mean, I have my bunch of songs, Brian has his, Roger, and John. . . And so, it's like four little solo projects working side by side and them we put them all together. So, I think that is the reason that we didn't go and do solo projects earlier on. If we were writing all the same kind of songs, then we would've gotten fed up and said, 'Oh, I want to do my solo album first.' But we all are writing different songs, so it keeps us interested."

The Pulse Of Radio asked Brian May what he thinks QUEEN's legions of fans feel about his and Roger Taylor's efforts to keep the band's legacy alive. "They probably see some genuine effort on our part and some probably [laughs] some genuine inspiration. Whatever else you might say about QUEEN, we were just totally dedicated to our audience."