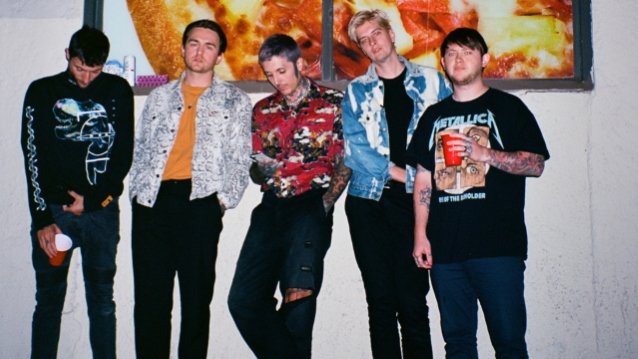 BRING ME THE HORIZON To Release 'Amo' Album In January

British rockers BRING ME THE HORIZON will release their new album, "Amo", on January 11, 2019 through RCA/Sony.

BRING ME THE HORIZON has been on a rocket of a journey over the last few years, selling over four million albums globally to date, playing sellout shows in over 40 countries, including two sold-out nights at London’s O2 plus wowing a traditionally non-rock crowd at Glastonbury Festival in 2016.

Poised now to release its sixth studio album, the band has spent the summer writing and recording in Los Angeles, with Oli Sykes and Jordan Fish handling production. What has transpired is one of BRING ME THE HORIZON's most exhilarating, genre-crossing albums to date.

Of the new disc, Oli says: "'Amo' is a love album that explores every aspect of that most powerful emotion. It deals with the good the bad and the ugly, and as a result we’ve created an album that’s more experimental, more varied, weird, and wonderful than anything we’ve done before."

On Tuesday, BRING ME THE HORIZON released a new single called "Mantra", with Sykes telling BBC Radio 1 about the track: "It felt like the first thing we wanted to show people upon our return."

Sykes said the music he and his bandmates are working on is "completely different" from "That's The Spirit", hinting, "We want to be a heavy band, but not in the way you think of heavy."

Prior to the new song's premiere, BRING ME THE HORIZON launched a mysterious campaign, including a billboard reading "Do You Want To Start A Cult With Me?" — a line that ended up being one of the lyrics in "Mantra".

While "Amo" will have some surprises, it very much sticks to the band's successful fan-pleasing formula of massive stadium-bouncing rock songs with huge singalong choruses. A sound that has earned them five A-list Radio 1 records to date.

The promotional campaign also saw the band starting a web site, joinmantra.org, with an initial message that read: "There are those who will say that only after a lifetime of sacrifice and good doing can the soul be free — that God demands conditions in the freedom and that some have the power of making mankind slaves."

The band's 16-city "First Love Tour" will kick off January 23 in Nashville, Tennessee and see them perform across the country, including stops in Atlanta, Chicago, Dallas, Los Angeles and more before wrapping February 16 in Las Vegas, Nevada.