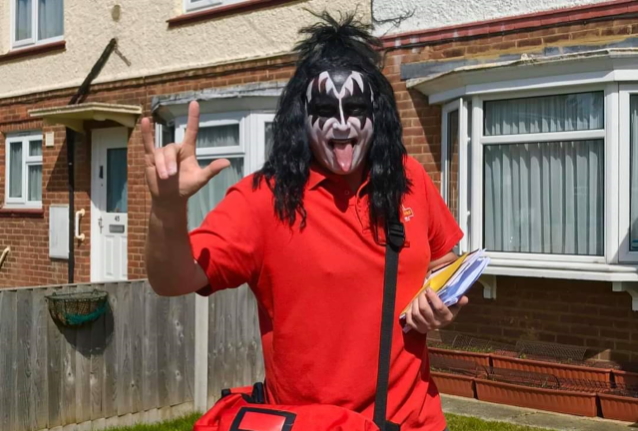 According to KentOnline, a 32-year-old mailman has been delivering mail on The Isle of Sheppey, an island off the northern coast of Kent, England, while dressed up as KISS bassist/vocalist Gene Simmons.

A photo of Gary Underdown on one of his rounds was shared by the official KISS Twitter account, before it was retweeted by Gene, along with the caption "Wow".

Underdown, who has been a mailman on Sheppey for two and a half years, told KentOnline: "I have been a KISS fan since I came out of the womb,” he joked.

"To get such a response, I think it's brilliant. If someone can have a laugh with it, that's what it's all about."

When asked why he decided to impersonate Simmons while delivering mail, Gary said: "I thought I would try and get everyone's mood up.

"Everyone's a bit down in the dumps with what's going on — it just lifted them up again.”

"I did it for the first time about a month ago and got such a good reaction, I thought I'd do it again.

"I've done it about four times now and people's reactions are great. You get a few who are like 'oh my God,' that's fantastic, and some people have been asking for a picture.

"It's just a bit of a gimmick and it's made a few people smile.

"I've only been able to wear the full make-up and wig on my rounds though, I couldn't walk 10 miles in the destroyer boots — but I have got a pair."

Back in 2014, Gary dressed up as Simmons to raise money for Help For Heroes, which supports wounded, injured and sick veterans and their families.