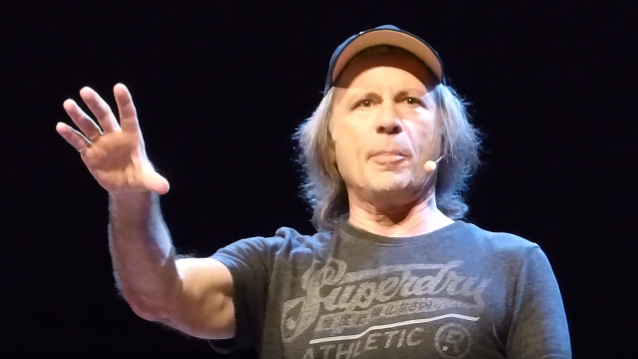 On the back of his recently released autobiography, "What Does This Button Do?", IRON MAIDEN frontman Bruce Dickinson is making a string of speaking appearances. On the tour, Dickinson is reading excerpts from his book, delivering slides and hosting a question-and-answer session in which fans can ask all the questions they have been dying to know about what it's like to front one of music's most iconic bands.

During his September 8 spoken-word gig at DR Koncerthuset in Copenhagen, Denmark, Dickinson was asked about his relationship with late DEEP PURPLE keyboardist Jon Lord. He responded (see video below): "Jon Lord was a wonderful gentleman, and we were close friends. And he sadly died of… He had pancreatic cancer, but he survived for a year and a half — much against what everybody had said would happen. And actually, at the end, he didn't die of pancreatic cancer — he died, unfortunately, of some terrible blood collapse that happened with him, possibly as a result of treatment. But we had all kinds of crazy plans, including me going out on tour with him, singing DEEP PURPLE songs with an orchestra, which he was planning to do; that was one of the things we were planning to do. But it all got interrupted and canceled, and [it was] obviously very sad. He was a wonderful man."

Asked if he could ever consider doing IRON MAIDEN as a classical music concert, i.e. with a symphony orchestra, Dickinson replied: "It's been tried a lot by all kinds of people, many of whom I respect, and, to be really honest with you, I don't think it works. I think it might work for the odd specific song — for example, 'Empire Of The Clouds', my thing, has kind of got orchestra all over it. But that's just one song, and that was written specifically with that kind of thing in mind. And I can see that working under certain circumstances, but that's only one song. And the problem with orchestras is what do you do with them when they're not in use? Which is actually quite a lot of songs, if they're gonna be really proper rock and roll-type songs."

"What Does This Button Do?", landed at No. 10 on the New York Times "Hardcover Nonfiction" best sellers list. It was released in the U.S. last October via Dey Street Books (formerly It Books),an imprint of HarperCollins Publishers.

Dickinson, who turned 60 last month, has several other interests beyond music. He is a licensed commercial pilot and owns an aviation company. He has written other books, done some acting and brewed beer.

In 2015, he completed a round of chemotherapy for a tumor on the back of his tongue and was given a clean bill of health. 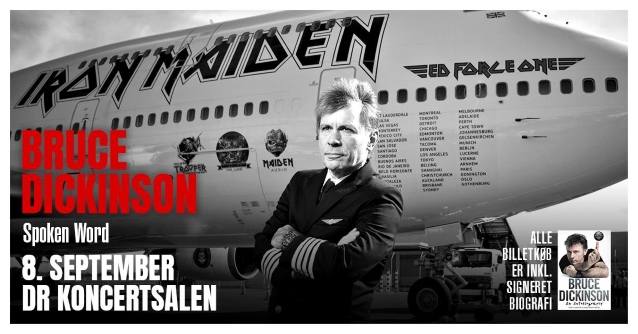