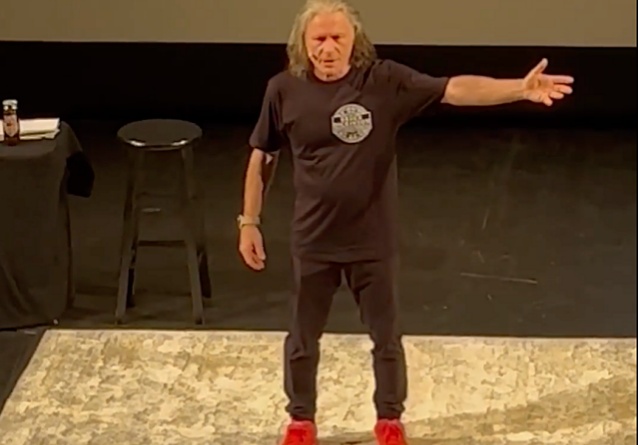 Bruce Dickinson has revealed what he believes is IRON MAIDEN's most underrated song. Taking to the stage at in Tampa, Florida on Thursday night (January 20) during his North American spoken-word tour, the polymath regaled the crowd with tales from his life in and away from fronting one of the biggest bands in metal.

As reported by Eonmusic's Eamon O'Neill, Dickinson was welcomed by a huge round of applause and wasted no time in delving straight into his life story, from his unconventional upbringing to his unlikely and oftentimes hilarious public school years.

Recalling his time with NWOBHM contenders SAMSON — whom he fronted from 1979 to 1981 — he quipped: "We made every mistake it's possible to make in the music industry — in a concentrated time."

Going on to talk about key events in his career with IRON MAIDEN, including the band's triumphant headline slot at Brazil's Rock In Rio festival in 1985, he also touched on his lack of contribution to the creation of the "Somewhere In Time" album. Recalling the writing sessions for the 1986 set, he admitted: "I was in a weird place. I was ready for the funny farm."

It was during the fan-submitted question and answer section that the Ed Force One pilot was asked what he thought was MAIDEN's most underrated track. "I'm a really big fan of 'Total Eclipse', he said, without hesitation, referring to the B-side to his debut single with the band, 1982's "Run To The Hills". Elaborating, he explained that the track "Gangland" was originally slated to appear on the flipside. However, the band had a change of heart. "That sounds great. This is so good that we can't do it as the B-side," he explained. Expanding on "Gangland", which is the penultimate track on the "The Number Of The Beast' album, Bruce divulged: "'Gangland' went on the album, and we actually forgot to mix the guitar solos. There's a bit in there, and there's no guitar solo. To this day, I think we forgot."

Read the entire report from Eonmusic.

A short clip from the end of An Evening with Bruce Dickinson in Tampa, FL

An Evening with Bruce Dickinson! 🤘🤘

What an AMAZING experience it was to see and hear Bruce Dickinson last night at the Tampa Theatre!

Last night I went and saw An Evening with Bruce Dickinson in Tampa, FL and was blown away. Such a funny and...