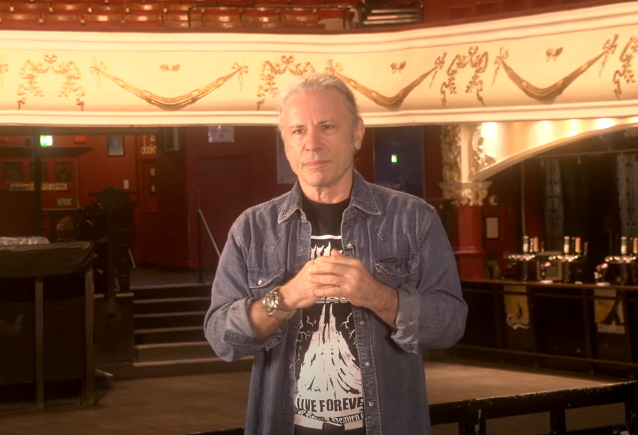 BRUCE DICKINSON On His Spoken-Word Show: 'It's A Sideways Look At My Life, Which In Some Ways Is Pleasantly Ridiculous'

So there's plenty to be entertained by throughout the evening's cornucopia of fascinating tales and derring-do exploits, all delivered by Bruce with characteristically infectious enthusiasm and wry wit.

Split into two parts, the first section of the show sees Bruce taking a humorous and often satirical look at the world from his own very personal perspective, as told first-hand in his inimitable anarchic style, punctuated with photographs, videos and sometimes even erupting into song a capella, to illustrate a point.

The final section of the evening is devoted entirely to a question-and-answer session, with the opportunity to pose questions on any subject whatsoever. The more left-field and quirky the question, the more interesting and compelling the response is likely to be.

Speaking about what fans can expect from his spoken-word tour, Dickinson said (as transcribed by BLABBERMOUTH.NET): "Mainly it's a sideways look at my life, which in some ways is pleasantly ridiculous. The show that is now the show has moved on quite a long way from what is just in [my autobiography]. Yes, it's a bit autobiographical but there's an awful lot more stuff. Part two gets interesting because it's, dare I say, a bit improv. I give you cue cards upon which you can write whatever you want — insults, advice, questions perhaps. And I then rearrange those like some sort of bizarre crossword puzzle into what becomes the third third of the show. So, basically, that's it — the last third of the show is created by you, with a little bit of help from me."