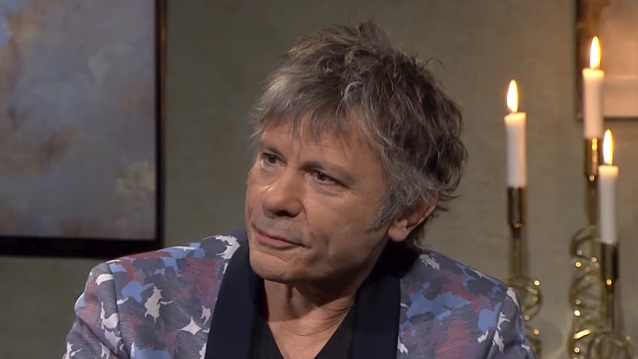 IRON MAIDEN singer Bruce Dickinson was recently interviewed for a special episode of the "Rock Talk With Mitch Lafon" podcast. You can now listen to the chat below.

Asked why he agreed to perform some of the Blaze Bayley-era IRON MAIDEN material upon his return to the band in 1999, Dickinson said: "Well, you know, life's too short to go around chucking your ego around like that — it's childish, it's stupid. And, actually, some of those songs kind of worked [with my voice], some of them didn't, but you know what? They were all songs which a lot of IRON MAIDEN fans bought, and some of them, in particular 'The Clansman' and 'Sign Of The Cross', I think we really nailed those songs and I thought it was great material. Blaze's voice, obviously, was quite different than mine — it was a slightly lower register — and, actually, I wasn't complaining, 'cause I could use this kind of lower baritone tone and get quite kind of robust on it all. And I really enjoyed singing those songs."

Dickinson went on to say that he "had the utmost respect for Blaze, because he stepped into a situation that was extremely difficult for him. Because, manifestly, his voice was so different to mine and yet he had to try and sing some of those [older IRON MAIDEN] songs. He was in a difficult place. And he was a very, very nice guy, and still is a very nice guy, and I have a huge amount of respect for him."

Dickinson recently told the "Do You Know Jack?" radio show that he "was surprised" Blaze was chosen to replace him in IRON MAIDEN. "I was delighted for Blaze, but there was a whole bunch of other really good singers out there," he said. "I thought 'Wow, they could have picked somebody with a voice that could do what my voice did.' But they picked Blaze. Obviously, they picked somebody different, but that came with its own set of challenges. I just wondered whether anybody in the management was really giving anybody any serious words of truth on how hard this could be. "

Last fall, Bruce's autobiography, "What Does This Button Do?", landed at No. 10 on the New York Times "Hardcover Nonfiction" best sellers list. It was released in the U.S. on October 31 via Dey Street Books (formerly It Books),an imprint of HarperCollins Publishers.