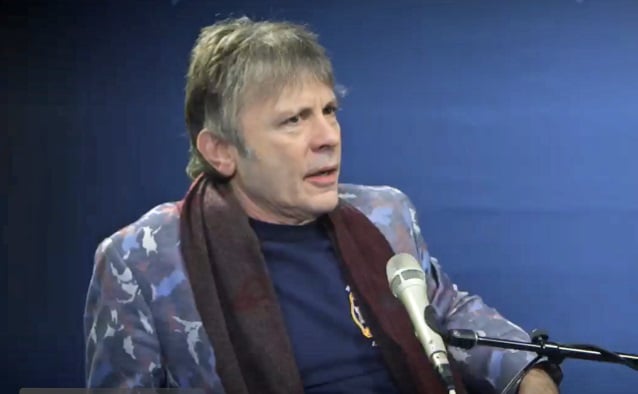 Bruce Dickinson says that Ronnie James Dio was originally supposed to take part in a proposed project called THE THREE TREMORS before he was replaced by Geoff Tate.

It was announced in 2000 that the QUEENSRŸCHE frontman would be joining Dickinson and JUDAS PRIEST singer Rob Halford in the all-star group, which was slated to record an album's worth of material with Dickinson's solo guitarist and Roy "Z" Ramirez.

That same year, Tate and Dickinson joined Halford onstage at the latter's concert in London for a rendition of "One You Love To Hate" (see video below),a song written by Halford, Dickinson and Ramirez that was featured on Halford's "Resurrection" album.

But in a brand new interview with the "Trunk Nation" show on SiriusXM channel Volume, the IRON MAIDEN vocalist said that Dio was his original choice for the third-singer slot in the since-aborted project.

"I was, like, 'I am not gonna do this without Ronnie,'" Dickinson recalled (see video below). "And Rod [Smallwood, IRON MAIDEN's longtime manager] was, like, 'I don't wanna use Ronnie. He's too old.' I said, 'What do you mean too old? Are you kidding me?' I said, 'He's a legend.' He said, 'No. We should use Geoff Tate.' And then we had a meeting with Geoff Tate, and then I said, 'No. It's not gonna work.' And so that was that."

According to Dickinson, concert promoters showed great interest in booking THE THREE TREMORS before a single note had even been recorded. "I could see the money in their eyes, thinking, 'Oh, this would be great. We could sell this every which way all over the place as a package,'" Dickinson said. "And I went, 'Yeah, you could, but what are we actually gonna do? There's gonna be three of us on stage. What are we gonna do that's actually different that's really cool?'"

Dickinson went on to reveal that the title track of his 2005 solo album, "Tyranny Of Souls", was composed specifically for THE THREE TREMORS project. "[It] was the only song that I wrote for which was designed for three voices, and the demo of it, I actually did almost impressions of a Rob version, the Geoff Tate bit and my bit and split them up," Dickinson said. "And we'd go into the big chorus of [singing] 'Tyranny Of Souls', obviously all three of us would be singing together, like a big choir. And doing that song, I thought, 'Yeah, that would kind of work.' But I need another twelve songs like that to do a whole performance, 'cause otherwise it's just a novelty thing. You can't do things just 'cause of the novelty value. You should do things because musically they're real."

Dickinson previously said that he and Roy wrote "about three songs" for THE THREE TREMORS during a session in Los Angeles before he "realized it was going to take us a lot longer than three weeks to write a project with three singers that would work."

He explained: "We wanted to make each song designed to be sung by three different characters as an integral part of the song, not something like, 'You sing the first verse, I'll sing the second verse, and he'll sing the chorus.' That would be a crap way to do it."

"It's a great idea; everybody loves the idea… We had marketing people salivating about the idea of a TRINITY project," he said. "But the bottom line is, the thing that is gonna sink it is if the music sucks. So I thought we should can the idea for now since we don't have time to do it. Rob was in the studio doing his album ['Crucible'] and Geoff was writing a new QUEENSRŸCHE album, so that was it. It is an interesting idea, and I'm sure the live show would be really interesting."

Dickinson is promoting his autobiography, "What Does This Button Do?", which was released in the U.S. on October 31 via Dey Street Books (formerly It Books),an imprint of HarperCollins Publishers.