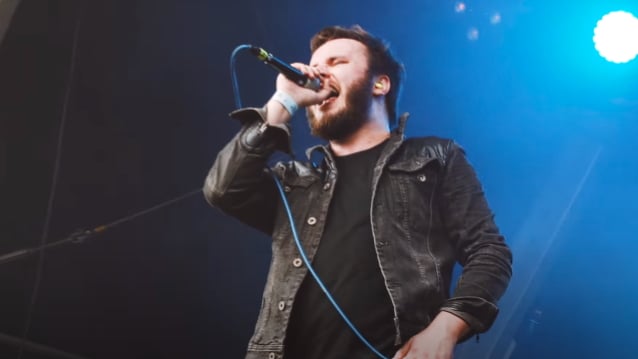 BRUCE DICKINSON's Son AUSTIN: 'Losing My Mum This Year Was The Hardest Thing I've Ever Had To Face'

Austin Dickinson, the son of IRON MAIDEN singer Bruce Dickinson, says that losing his mother this year was "the hardest thing" he has ever had to face.

Bruce's second wife, Paddy was found dead in May at the home they once shared in Chiswick, West London, following a "tragic accident." London Ambulance Service confirmed that the patient was pronounced dead on arrival.

Bruce and Paddy had married in 1990 after two years of dating and shared three children: Austin, 30, Griffin, 28, and Kia, 26. They tied the knot after dating for two years following Bruce's split from first wife Jane.

Earlier today, Austin, who is the frontman of AS LIONS, the U.K. hard rock band that formed in 2015 from the ashes of RISE TO REMAIN, took to his Instagram Stories to write: "This has been the worst year of my life, without question. In all honesty, the few years before it, hadn't been great either. It's been a long upward hill slog against depression, adversity and anxiety, and in the current absence of the world we knew, a balancing act in coming to terms with a long list of terrible things I've experienced, internalised and never dealt with.

"Losing my Mum this year was the hardest thing I've ever had to face," he continued. "There is still so much that lays unresolved. There's not an hour that goes by that she doesn't cross my mind. The initial days of watching people the world over respond with cruelty AND condolences was isolating. Whether it was being pursued by swathes of entitled people, by journalists outside the house, or the randoms dragging your departed parent's name online, or the relentless speculation around their manner of death. How could anyone outside of the epicentre really relate to what that does to a person? Let alone a family?

"Likewise, watching my friends suffer has been hard, especially since I know they have been there for me. We are told these are 'hard times', but the repetitive day in/ day out experiential crisis doesn't gain any clarity under such platitudes, because the reality is present in every minute of every day, felt in extremity. Saying these are 'Hard times' almost feels completely detached from how horrendously engaging this void can be. I feel terribly for everyone and anyone touched personally, professionally or socially by this. I'd wager that is all of us.

"2021 will not be easy, and we are fooling ourselves if we say it shall," Austin added. "But our kindness, the one superpower we universally possess, will be our saving grace. After feeling as though I lost everything, and after being supported hurdle, after hurdle, over the hills to where I am today, I can safely and confidently promise you: this is the truth. So if you are still here, know we have a future, a story to tell and a choice in our hearts. Turn around and face what comes next with everything you already possess: fierce compassion. Deep empathy. And a harmonising Kindness. It all takes bravery, but I promise you, it will be the thing that saves us, time after time.

Six years ago, Dickinson was diagnosed with stage 3 throat cancer after doctors discovered a golf ball-size tumor on his tongue and another in the lymph node on the right side of his neck.

The singer got the all-clear in May 2015 after radiation and nine weeks of chemotherapy and later covered his cancer battle in his 2017 autobiography, "What Does This Button Do?"