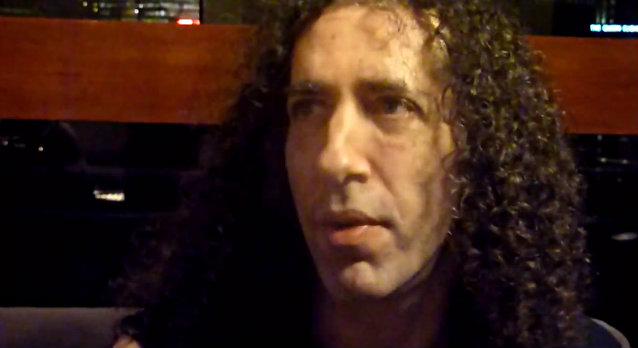 "I regret to inform BRUTAL TRUTH fans that as of October 18th, 2014, I will be retiring from being a full-time recording and touring musician. That date is my 50th birthday, so I chose it symbolically as a significant milestone to make such a weighty decision.

"As a lot of you know, I've been an active member of the metal scene since the early '80s with the thrash metal bands I've been in before the formation of BRUTAL TRUTH in 1990, and I'm simply just tired of the rigors of touring mostly.

"Unlike some of my peers from the '80s who went on to sell millions of records, I have always been drawn to extreme underground metal. I don't care about staying in 5-star hotels and having a big cushy tour bus, but I am getting tired of squeezing into a van for 8 hours after all these years on the road.

"I have always played what I believe in and that is been priority #1, but the time has come to have a little bit more stability in my life.

"BRUTAL TRUTH will still be active on the touring front until mid-October and will aim to do as much as we can in the next 9 months or so. After that, I will still have creative output with my two local bands in Rochester, New York, NOKTURNAL HELLSTORM and BLURRING, and do the occasional project tour, but yes, as of mid-October, BRUTAL TRUTH will no longer exist.

"I do realize that will be an extreme disappointment to all the grind freaks out there that have supported this band so rabidly all these years, and your enthusiasm will always have a special place in my heart, but I've made my decision, and I hope everyone can respect that.

"Please note that messages sent to the BRUTAL TRUTH Facebook will not be answered, as I do not have my own personal Facebook page, therefore I do not have access."