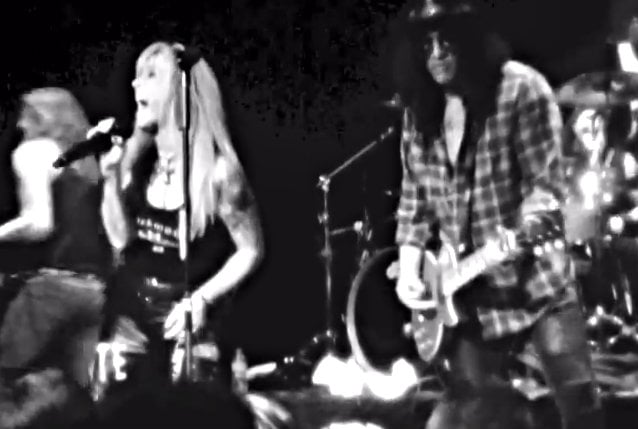 Lita Ford was joined by Slash (GUNS N' ROSES, VELVET REVOLVER) and Glenn Hughes (BLACK COUNTRY COMMUNION, BLACK SABBATH, DEEP PURPLE) on stage during her headlining performance last night (Thursday, January 9) at the Whisky A Go Go in West Hollywood, California as part of the nightclub's month-long 50th-anniversary celebration. Fan-filmed video footage of the concert can be seen below.

Ford released a new live album, "The Bitch Is Back...Live", on November 5, 2013 in North America, on October 25, 2013 in Germany and on October 28, 2013 in the rest of Europe through SPV/Steamhammer. The disc features a recording of Lita's October 2012 performance at the Canyon Club in Agoura Hills, California. The album was released as a digipak with a special booklet including fan photos and download.

In a recent interview with Geeks Of Doom, Ford stated about her tours: "They're chaotic! It's like going to war and then coming out winning. You've gotta win the war. It's such a good feeling when you come out [and] you're done. You go on these little adventures and [they're] really difficult, in a good way. A challenge. And we got such a good band and we got such a great group of guys working with us that everything is so professional. We take a wacky situation and we make the best out of it. We come out of it with such a good feeling. All the shows have been so good they're just magic because of the combination of people I have working with me."

Ford's latest studio album, "Living Like A Runaway", was released on June 19, 2012 in North America. The effort was made available in four configurations: a double LP, limited-edition CD, standard CD and digital download. The artwork for the album was created by famed rock photographer Mark Weiss.