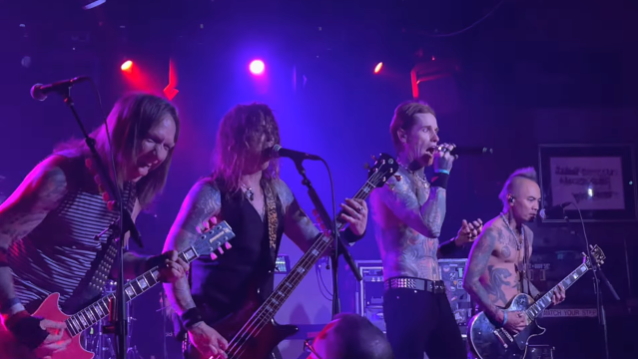 BUCKCHERRY has been forced to cancel one show on its current U.S. tour and postpone a couple of others after singer Josh Todd tested positive for COVID-19, the disease caused by the SARS-CoV-2 coronavirus.

Earlier today (Saturday, June 11), BUCKCHERRY released the following statement via social media: "TO THE FANS: Near the beginning of last night's show in Riverside, Josh began to feel very ill on stage and realized he would be unable to complete the show. He returned to the bus and took a rapid COVID test which came back positive.

"While he is resting and taking care of himself, we are, unfortunately, going to have to cancel tonight's performance at Thunder Valley Casino in Lincoln and postpone tomorrow's show at Coach House in San Juan Capistrano and Tuesday's show at the Rialto Theatre in Tucson.

"Rest assured that Josh is doing alright and we'll be back in action very soon.

"All VIP purchases for tonight's canceled performance at Thunder Valley are being refunded. To those who had tickets to last night's show in Riverside, as well as those in San Juan Capistrano & Tucson, please hold on to all tickets and VIP purchases and stay tuned for more info regarding rescheduled performances in late October.

"We apologize for the inconvenience, but we will see you very soon!"

Last September, Todd told the "TODDCast Podcast" that he "jumped on" getting the COVID-19 vaccine as soon as he had the opportunity. "I don't hold anybody to what they've gotta do," he said. "I hope that everybody would just get it for the greater good and not think of just themselves, so that we could get through this and get to the other side and make it a little more manageable. But I do understand that people do have medical issues and whatnot — they're dealing with a lot of stuff. And that being said, what are you gonna do?"

Todd, who celebrated his 27th year of sobriety in November, recently told SiriusXM's "Trunk Nation With Eddie Trunk" that he became a certified phlebotomist during the lockdown. Asked about the steps that are involved in getting certified in phlebotomy, which is the drawing of blood by venipuncture for transfusion, diagnostic testing or experimental procedures, Josh said: "I went to a two-week program where you stick and you get stuck a lot by students. And then you've gotta take a national exam, and I did that as well, and I passed that. And then you get out in the field and do your thing. And that's what I did for, like I said, four months out in downtown L.A.; I worked at a COVID clinic. And it was interesting.

"I've always been a worker — I've worked since I was 13 — so not working is not good for me," he explained. "And I always became interested in it. I always go to Quest Diagnostics. I get my bloodwork annually there, because the best phlebotomists are there. I remember this one big, tall tattoed dude came out and drew my blood one time, and I literally didn't even feel it; he was so good. And we started chatting, and I just became interested in it — a long time ago, way before the pandemic. And then I was just, like, 'I'm gonna go learn this. I'm gonna learn it.' And so I did it."

Last month, Josh told the 96.7 KCAL-FM program "Wired In The Empire" that BUCKCHERRY plans to record its tenth studio album at the end of this year. He said: "We are still touring. We've been touring since June 1st of last year. We put in about 200 shows typically on a record cycle. So we're gonna finish out this run; it goes all the way to September. And we've been already writing for the new record, so we almost have a whole record of material together now. So once we get off the road, we'll go in and record and then we're gonna take a few months off and then put out our tenth record."

TO THE FANS: Near the beginning of last night's show in Riverside, Josh began to feel very ill on stage and realized he...