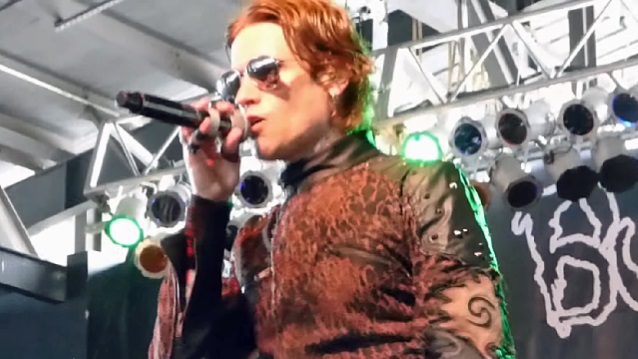 Terrie Carr of WDHA-FM 105.5 FM, the rock music station licensed to Dover and Morristown, New Jersey, recently conducted an interview with vocalist Josh Todd of Californian rockers BUCKCHERRY. You can now listen to the chat at this location.

Speaking about BUCKCHERRY's work ethic, Todd said: "We're always working. When we're not on the road, we're at home and we're writing new songs. We like to work."

He continued: "We started a new record label called F Bomb Records. The ['Fuck'] EP came out on that. And now we're working on our first LP on the record label, which will be our seventh full-length album, and that's gonna be coming out in the first quarter of the New Year. So we're looking forward to that. There's some really good stuff in the works, good songs, and we're having a lot of fun writing 'em."

The Truth Tattoo Care Kit is a revolutionary kit featuring Tattoo Balm, Gentle Tattoo Cleanser and Moisturizing Tattoo Lotion. Important aspects of care and protection were considered during the development of this kit. The Tattoo Balm is formulated with protective oils and Shea butter to be used right after having tattoo artwork completed. The Gentle Tattoo Cleanser will help keep fresh tattoos clean while healing. And the Moisturizing Tattoo Lotion is a clean, non-sticky formula to intensify colors and accentuate tattoo artwork.

BUCKCHERRY in August released the "Fuck" EP via the band's newly established F Bomb imprint. Each of the six songs on the disc has the F-word in the title, including "Somebody Fucked With Me", "I Don't Give A Fuck" and the first single, a cover of Icona Pop's hit "I Love It", re-imagined as "Say Fuck It".