Never a band to play by the rules, BUCKCHERRY has made a career out of pushing the boundaries and buttons of conventional rock music. Whether it's a song audaciously celebrating the finest white flake ("Lit Up"),an homage to unstable and irresistible young ladies ("Crazy Bitch") or an apologetic ballad ("Sorry"),BUCKCHERRY have always done things their own way and it's paid off with six highly successful studio albums and multiple hit singles over the last decade. And apparently they were only getting warmed up!

BUCKCHERRY will return this summer with one of its boldest and most controversial releases to date, "Fuck", a six-song EP that unapologetically rattles the speakers as much as it will the censors. The record features six balls-to-the-wall tracks that erupt with gritty riffs and sharp-tongued lyrics, including the radio single and riotous cover of Icona Pop's hit song "I Love It", which the band naturally cranks to 11 and renames "Say Fuck It".

Earlier this year, BUCKCHERRY singer Josh Todd told Loudwire about "Fuck": "I'm a huge fan of EPs and I had a lot of 'em when I was a kid, so it's going to be fun to put this one out." Though he did not givie away the concept, Josh did state, "It's nasty and it's raw and it's quintessential BUCKCHERRY … It was a lot of fun writing it and it was great to do this EP for me after doing 'Confessions', 'cause 'Confessions' was so heavy and deep and this EP is just reckless and fun. It's probably one of my most fun little projects to do."

You can now stream "The Motherfucker" using the SoundCloud widget below.

Rock's favorite misfits will take their new EP on the road this summer with dates on the Rockstar Energy Drink Uproar Festival tour and an appearance at the Monster Energy Aftershock Festival in Sacramento, California. Additionally, BUCKCHERRY recently launched its "Singles Club" via PledgeMusic, where fans have the opportunity to sign up for a 6-month subscription to receive new, unreleased cover songs the band has recently recorded. 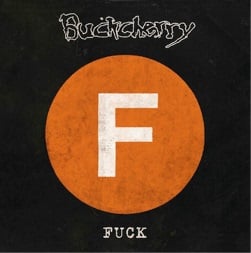