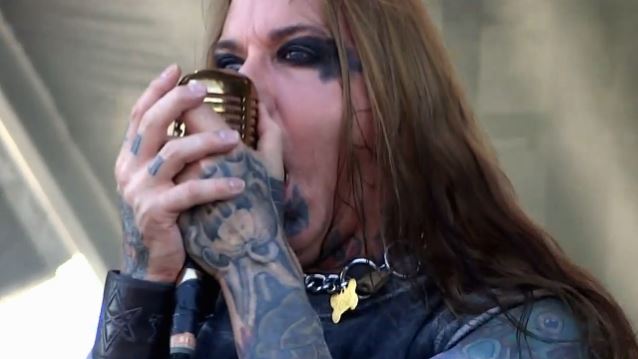 COAL CHAMBER, the reformed '90s alt-metal band fronted by current DEVILDRIVER singer Dez Fafara, has inked a deal with Napalm Records. The group is currently working on new material for an album which it hopes to release next year.

Said Fafara: "How many times do you get a second chance at anything in life?

"We toured the world; it was insane and crowds came out in force and we had a blast! For this, I'm so appreciative! Now it's time to release a new COAL CHAMBER record!

"The vibe between us all is positive and we've assembled a killer team around us!

"Now with Napalm Records on board, get ready for a heavy, explosion from COAL CHAMBER!

"We've evolved and so has the music.

"From the demo music I've heard, you’re gonna sink your teeth into this!"

Adds bassist Nadja Peulen: "It's been a long time coming but the wait is over!

"There are no words to describe how excited I am to be working on the new COAL CHAMBER record!!!

"I can't wait to see all your faces when we rock this album out!"

Said drummer Mikey Cox: "This is the first time in a long time that writing and recording a record feels right.

"[I am] extremely grateful and excited for this new chapter in the world of COAL CHAMBER!!

"New music from CC is something we can't wait to share with the many loyal fans that have stuck it out through everything!!!

"The evolution of COAL CHAMBER has begun!"

Stated guitarist Miguel Rascón: "I'm so excited to be making music with my brothers and sister, and to the loyal fans who've been waiting for this!

"It's been a long time coming, but the pieces of the puzzle are finally aligned right. The friendship, the camaraderie, the vibe of the band is perfect now. Can't wait to unleash on the world!"

Napalm Records vice president Thomas Caser said about the signing of COAL CHAMBER: "Rarely you get the chance to work with a band that has been a pioneer of a whole genre.

"We are thrilled and proud to get this chance with COAL CHAMBER!

"A new chapter of the band's history is being written and Napalm Records is committed to make it the most successful!"

Peulen returned to COAL CHAMBER in November 2013 following the departure of Canadian bassist Chela Rhea Harper, who joined the band in late 2011 and toured with the group for nearly two years.

In an interview with the WGRD 97.9 FM radio station in Grand Rapids, Michigan, Dez Fafara stated about the possibility of new music from COAL CHAMBER: "[In September 2012], [guitarist Miguel Rascón and drummer Mike Cox] sent me some new tunes and said, 'Hey, would you ever think about doing a new record? Here's some new tunes.' And they were absolutely killer. They were moving forward with their sound, but yet you could tell it was COAL CHAMBER, but it wasn't so linear."

Regarding why neither of the two former COAL CHAMBER bassists — Nadja Peulen or Rayna Foss — had been involved in the band's reunion up until the end of last year, Dez told Full Metal Jackie in a separate interview, "Rayna was not [asked to be a part of it]. Rayna has been out of the band for a very long time. We did speak to Nadja. She [had] other things going and it wasn't really in the headspace where we were at as a band."