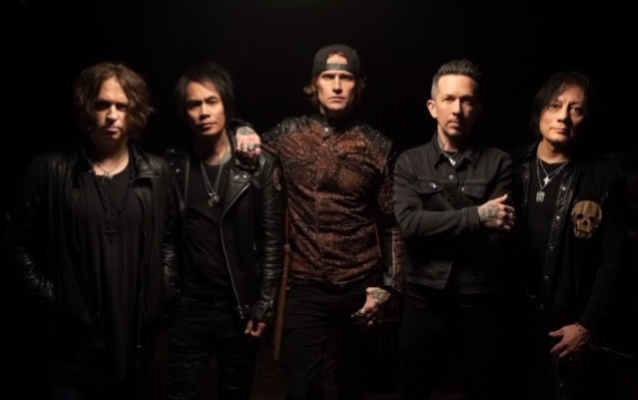 Californian rockers BUCKCHERRY have recruited Francis Ruiz as their new drummer. He joins the band as the replacement for Sean Winchester, who left BUCKCHERRY after laying down the drum tracks on the group's new album, "Warpaint".

Francis told BLABBERMOUTH.NET: "I've been back and forth behind the drums to working with some of the greatest drummers and bands out there. It's all good and for a love of great music and drumming — that's how I see it.

"Getting to tour with so many of my drumming idols has been an experience I am very grateful to have," he continued. "Many players in bands may not ever get that experience — that everyday one-on-one friendship and trust — and I can say I have learned from the best. That is invaluable. I have learned so much from each and every one of them — about drumming, performing, health, gratefulness, humility, relationships, and always striving to be better. All of these are important if you choose a life of touring. Not only drummers though — I have so much love and respect and have learned volumes from Zakk Wylde. He is a machine! He also displays so much passion and compassion in everything he does. And he never stops.

"The greatest feeling now is that I am in a band, a full band that all have every bit of the same qualities I just mentioned. We're all cut from the same cloth, love the same music, know the same people, stomped the same streets. That, again, is invaluable."

Fan-filmed video footage of Ruiz performing with BUCKCHERRY on January 17 at The Canyon club in Santa Clarita, California can be seen below.

Winchester hooked up with BUCKCHERRY in 2017 following the departure of the band's longtime drummer Xavier Muriel. Sean was previously the drummer of JOSH TODD & THE CONFLICT, the group featuring BUCKCHERRY singer Josh Todd and guitarist Stevie Dacanay (a.k.a. Stevie D.).

"Warpaint" will be released on March 8 via Century Media/RED Music/Sony. The 12-song disc, featuring 11 new BUCKCHERRY songs along with a cover of the NINE INCH NAILS classic "Head Like A Hole", was produced by Mike Plotnikoff, whose last collaboration with the band was the platinum-certified album "15".