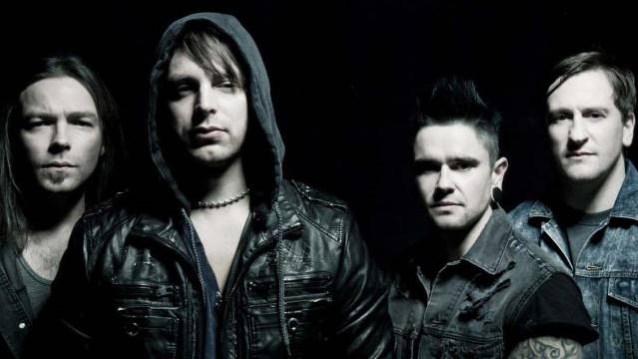 Says the band: "We've been working hard on this record for over a year now, writing and demoing a ton of material in that time. As we sit here on the 1st of February 2015, we have the most songs we've EVER had written for an album before recording session, and now begins the difficult process of choosing the best of the best of them to make the cut for #BFMV5.

"Going into this process, we couldn't be more happy or excited to have our man Colin Richardson back behind the desk again. We worked with Colin on our first two records, 'The Poison' and 'Scream Aim Fire' (as well as the self-titled BULLET FOR MY VALENTINE EP) and as we listened back to those records during the writing process for this new album, we realized what a special vibe and excitement these records have, and why they're held in such high respect by our fanbase.

"This album, though, is not about going backwards. We're excited to work with Colin again, but equally excited to be working with Carl Bown for the first time, who we consider the most exciting new British record producer out there right now, and the guy to help take this BULLET record to exciting new places.

"Today we start the recording process for #BFMV5. We'll be taking and uploading one exclusive new photo from the studio per day on our Instagram account, so if you're not signed up yet, you're missing out, as we've just posted our first pic over there now.

A new song from BULLET FOR MY VALENTINE titled "Raising Hell" was premiered on the November 18, 2013 edition of BBC Radio 1's "Rock Show" with Daniel P. Carter and was released digitally on December 10, 2013.

The bandmembers, who only released their latest album, "Temper Temper", in March of 2013, recorded and produced the track themselves at Metropolis Studios in between finishing touring America and before their U.K. arena tour, where they debuted the track live for the first time ever.

BULLET FOR MY VALENTINE frontman Matt Tuck told the Germany's EMP Rock Invasion about the musical direction of BULLET FOR MY VALENTINE's new material: "[The new songs are] sounding very good. I don't know how to explain it, really… It's definitely more aggressive, edgier. It's definitely stepping back into the heavier side of what we've done in the past. And I don't mean that as in, like, a screaming way… just aggressive music, you know."

Asked about the mixed response to the "Temper Temper" album, Tuck said: "I wouldn't change that record for anything, really. That's the record we wanted to make, and that's what we should be doing; we should be doing what we want, and we shouldn't be trying to please anyone else. If the next album we write doesn't get well received for whatever reason, then it's, like… you can't do things for other people. We've gotta do it for ourselves, and that's the only way we can stay true as a band. I think a rule that we've always stuck by since Day One was we do it our way and we do it what we wanna do or we don't do it at all. I think someone else fucking up your career is not acceptable. So if we fuck it up, at least you can sleep at night, you know what I mean? So we're extremely happy with it, and here we are today still rocking big venues around the world. So we [must be doing] something right, you know?!"