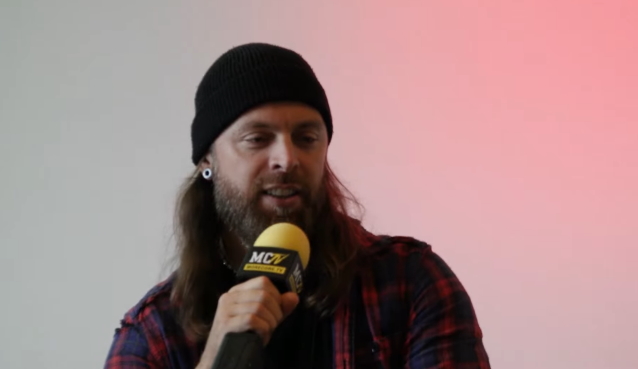 BULLET FOR MY VALENTINE Frontman's Advice To Young Bands: 'Ignore Everyone And Do What You Want'

In a new interview with MoreCore, conducted at this month's Rock Am Ring festival in Nürburgring, Germany, BULLET FOR MY VALENTINE frontman Matt Tuck was asked what advice he would give to new bands who are just starting out. He said (as transcribed by BLABBERMOUTH.NET): "Just ignore everyone, do what you wanna do and hope that 20 years later you're still here. The moment you start listening to people's criticism and praise; you can't have one without the other..."

He continued: "On your first couple of albums, it's hard not to kind of listen to stuff — people's opinions and criticisms and all that stuff; if you're a young band, it's hard not to kind of take it on board. But as you progress through the records, you begin to understand that as long as you do things the way you want to, it doesn't really matter what people think. You just continue on your journey — do what's in your heart. Write music that you know is gonna piss people off; do music that you know people are gonna love. Just do it for the right reasons. Do it for yourself — that's the best thing. If you start listening to other people's criticisms and write things stylistically for those people to try and prove a point, then you're kind of pandering to their criticism. So just ignore everyone [and] do what you want."

BULLET FOR MY VALENTINE will release a deluxe version of its current, self-titled album on July 8 via Spinefarm/Search & Destroy. This extended release features four brand new tracks, plus "Stitches", a song previously only available as a Japanese exclusive. Following the CD and digital releases, a vinyl pressing will launch on November 11.

"Bullet For My Valentine" arrived in November via via Spinefarm/Search & Destroy. The LP was written beginning in September 2019 with longtime producer Carl Bown, who co-produced the band's 2015 album, "Venom", and produced and mixed 2018's "Gravity".

BULLET FOR MY VALENTINE recently announced a U.K. tour for early 2023. The run of shows will kick off on February 27, 2023 at Cambridge Corn Exchange, and will make stops in Bristol, Liverpool, Newcastle, Glasgow, Leeds, Birmingham and more before wrapping up in London at the Roundhouse on March 11. They will be joined by special guests JINJER and ATREYU.