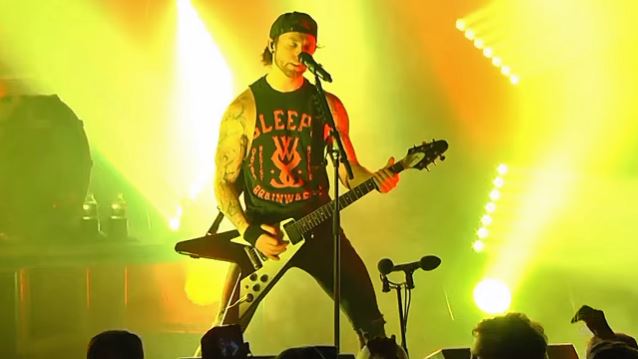 BULLET FOR MY VALENTINE Releases Official Performance Video For 'You Want A Battle? (Here's A War)'

Welsh metallers BULLET FOR MY VALENTINE have released an official performance video for the song "You Want A Battle? (Here's A War)". Check it out below.

BULLET FOR MY VALENTINE guitarist/vocalist Matt Tuck revealed to Billboard that "You Want A Battle? (Here's A War)" is about being bullied — something that he experienced a lot while at school because he "was not a really cool kid. I was into heavy metal music and had long hair."

Tuck wrote the track to reassure fans that bullying "happens to everybody, and it's not a nice place to be when that happens. It took me a long time to actually pluck up the courage mentally and physically to stand up for myself, so it was kind of momentous moment for me. I had lost all these battles in my young life, and all of a sudden I was growing into a young man. I was able to stand up for myself and defend myself, and the band actually became something big and special and just like the biggest 'fuck you' to everyone. That's what that song's about, really. It's about going through hard times and coming through the other side."

The band's latest album, "Venom", was released in August 2015 via RCA. The CD marked BULLET FOR MY VALENTINE 's first release since the departure of longtime bassist Jason James and addition of Jamie Mathias (formerly of REVOKER).

BULLET FOR MY VALENTINE drummer Michael "Moose" Thomas took a temporary leave of absence from the band earlier this year to spend time with his wife, as they awaited the birth of his first child. Filling in for him was Jason Bowld (PITCHSHIFTER, AXEWOUND).