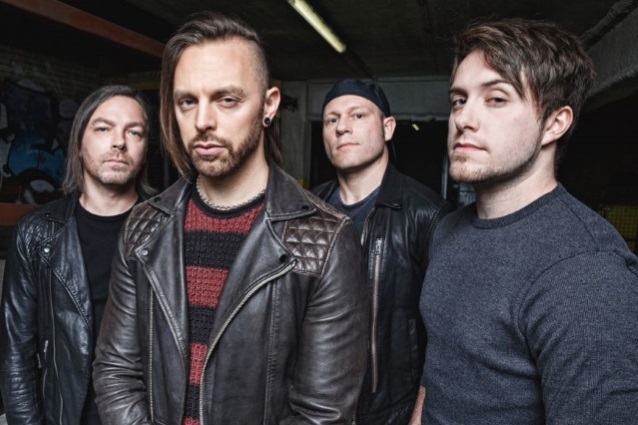 BULLET FOR MY VALENTINE To Release 'Gravity' Album In June; 'Over It' Single Receives World Premiere

Welsh metallers BULLET FOR MY VALENTINE have set "Gravity" as the title of their sixth studio album, due on June 29.

The first single from the disc, "Over It", received its world premiere earlier tonight (Sunday, April 1) on BBC Radio 1's "Rock Show With Daniel P. Carter" and can now be streamed below.

The follow-up to 2015's "Venom", "Gravity" will mark BULLET FOR MY VALENTINE's full-length recording debut with new drummer Jason Bowld (PITCHSHIFTER, AXEWOUND),who has been touring with the group for the past two years, and bassist Jamie Mathias (formerly of REVOKER),who joined the band after the last disc was completed.

BULLET FOR MY VALENTINE frontman Matt Tuck told NME that he "definitely" took the lead in the songwriting department on the band's new album, explaining that he "had a bit more of a vision" than the other guys on what he wanted the record to be like.

Asked about the lyrical themes covered on "Gravity", Tuck said: "There's a lot of stuff that will be very self-explanatory when people hear it. I don't wanna say too much about it yet 'cause it is very early days, but it's a very personal record for me. It's got highs and it's got very dark lows. But it's very real, and I think people will relate to it."

"Gravity" will be released through BULLET FOR MY VALENTINE's new label home, Search And Destroy, the imprint launched in 2014 by Spinefarm and international artist management company Raw Power Management.