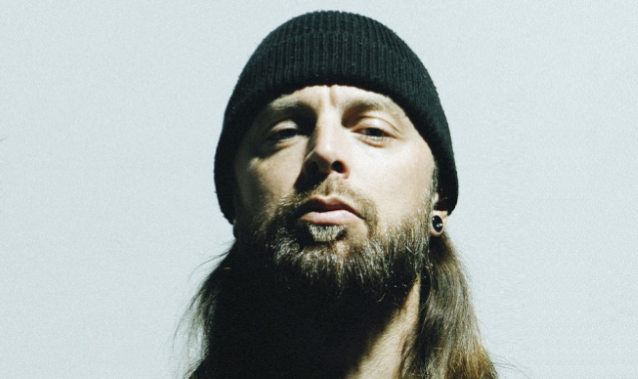 BULLET FOR MY VALENTINE's MATT TUCK: 'COVID And Brexit Are Making Our Lives Doubly Horrible'

Matt Tuck of Welsh metallers BULLET FOR MY VALENTINE spoke to AndrewHaug.com, Australia's first-ever dedicated 24/7 rock and metal online radio station, about it's going to be like for the band to embark on its first pandemic-era international tour.

"I think the best thing that we can do now, as far as the band and the crew, is just get double vaccinated and just kind of do what we need to do if we need to travel," he said (as transcribed by BLABBERMOUTH.NET). "It's not a huge ask to do a test before getting on a flight, for example — it's not really a big ask — and if that's what it takes for us to be able to continue on with our life and our musical journey and our career, that's what we'll do.

"The world is a big place, and, unfortunately, we're not all on the same page, for whatever reasons — politically, medically, whatever it is. It's tricky," he continued. "So we can only really focus on what we're in control of at the moment, and that's a U.K. tour which is on sale and doing really well. We've got a European run at the end of January [going] into February, which is looking okay. But we've got the double hit here in the U.K. of, obviously, COVID and Brexit, which is making our lives doubly horrible. For touring musicians, it's an absolute nightmare because that freedom of movement that we once had to go through Europe and travel through Spain and France and Portugal and Greece — all throughout the continent — has been taken away from us. And we don't really know what that means yet because we've had COVID get in the way as well. So, yeah, it's not looking good short term. I'm sure it'll sort itself out. But all we can do at the minute is really just focus on what's directly in front of us rather than too far into the future 'cause there's just so many hurdles right now, it's not worth stressing ourselves out about it. And we'll just let management and promoters and agents globally try and work it out between them on how we can make this work."

Many countries in the EU reportedly still require expensive visas for U.K. artists to tour.

The U.K. government has been heavily criticized for jeopardizing the future of touring for U.K. artists when the Brexit deal secured with the EU failed to negotiate visa-free travel and Europe-wide work permits for musicians and crew.

BULLET FOR MY VALENTINE's latest, self-titled album arrived on November 5 via via Spinefarm/Search & Destroy. The LP was written beginning in September 2019 with longtime producer Carl Bown, who co-produced the band's 2015 album, "Venom", and produced and mixed 2018's "Gravity".