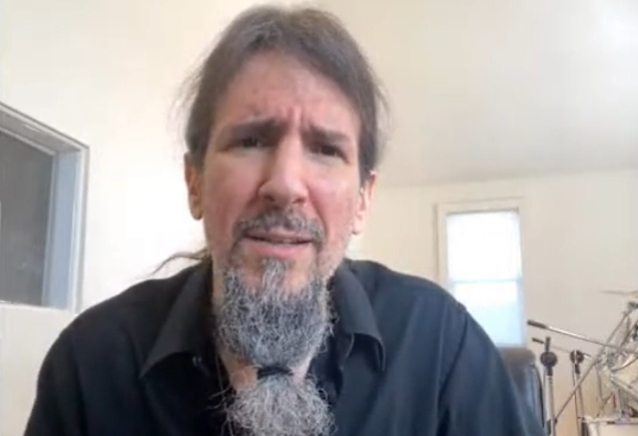 BUMBLEFOOT Looks Back On His Time With GUNS N' ROSES: 'I Was Inexperienced At Being A Hired Gun In A Stadium Band'

Thal joined GUNS N' ROSES in 2006 and played on 2008's "Chinese Democracy", an album which contained music that had been written before he came into the group. The disc took 13 years to make and was only a modest seller, moving just around half a million copies.

Thal looked back on his time with GUNS N' ROSES during a March 12 appearance on FaceCulture's "Behind The Music" livestream. He said (as transcribed by BLABBERMOUTH.NET): "My dream was always to be in a John-Paul-George-Ringo, not John-Paul-George-and-a-hired-guy," he said, referring to THE BEATLES' classic lineup. "Not to put it down and not to understate the eight years that I had with [GUNS N' ROSES] — and I did write and play my own parts on 'Chinese Democracy' — but for me, I need to be a founding member and a writer of the music and a creative part of it.

"When I played with GUNS, it was cool playing all the big stages and everything," he continued. 'Yes, that was wonderful, and it's what you aspire to as a kid when you start out."

Asked to describe his years with GUNS N' ROSES with one word, Thal said: "Intense. It was very intense. It was high highs, low lows and everything in between. And I made a lot of good friends. I hate to say I learned a lot of things, 'cause it's not supposed to be an education — you're supposed to be there 'cause you don't need an education, but you never stop learning, and that's the truth. And I got experiences and learned things that I didn't do yet. So that was good. But at the same time, I was touring a lot before GUNS — a good 10 years of international touring. I mean, I played Russia before GUNS did, doing solo stuff — things like that. So it's not like I was completely inexperienced. I was just inexperienced at being a hired gun in a stadium band or an arena band. So with that, that was a whole new thing. 'Cause for me, bands were your friends that you played together and you had this familial kind of relationship, and you're not just brought in to play with strangers. And I have done that kind of thing as well, where I've been called in to play gigs, but never on something on such a big scale and where it would be something that really is the biggest thing of notable name recognition or anything that I had done. So that was different. And there's lots that come with that that you didn't expect."

Asked if he still speaks with GUNS N' ROSES singer Axl Rose, Thal laughed and said: "He's doing his thing, I'm doing my thing, and I wish them all the best. And I'm so happy to see how great they're doing with [classic-lineup members] Slash and Duff [McKagan]. I'm very happy for them."

In a 2017 interview with Meltdown of the Detroit radio station WRIF, Thal said that it would feel "kind of weird" if he went to see the reunited partial classic lineup of GUNS N' ROSES perform in concert. "I quit the band and they moved on and I moved on. It's not like we quit pretty," he explained. "And also, what am I gonna do? I'm gonna stand in the audience and everyone's gonna be, like, 'Hey, you used to be there.' It's too weird, man.

"I wish 'em well and all, but to actually physically go [and see them], after hundreds of times on the stage with them, it just feels very surreal," he continued. "I always describe it like going to see your ex-girlfriend's wedding. And I don't mean any disrespect by that, and I do wish them well and I'm happy that they're doing so, so good. But for me to go and see it, it would just stir up a lot of stuff. So it's better that I'm just doing my thing, they're doing their thing and everybody just wishes each other well from afar. And I get lots of good reports from friends and everything and I'm still in touch with people in the camp. I'm real happy for them — they're on top of the world right now, so good for them."

Back in September, Thal told Jam Man that he "sometimes did" and "sometimes didn't" get along with the members of GUNS N' ROSES while he was in the band. "When a bunch of dudes are living together for months at a time, traveling from place to place and living such an intense life while you have this whole other life that's happening back home that needs you, there's a lot of things that can wear a person down, individuals," he explained. "And when that person gets worn down, they're not gonna be at their best. And other people, depending on who they are, the way they react to people who are worn down and not at their best, it will trigger things in them and maybe not bring out their best. And it's very easy for the stress to get the best of people in a group environment — whether it's a band, whether it's an office, whether it's anyting. That's just the nature of human beings. The way we feel is very contagious. If one person is foul, everyone gets foul. If one person is happy, everyone can get happy. If one person is laughing, everyone starts laughing. So it's very easy for us — and when I say 'us,' I mean any group of people — to react to each other in any direction.

"So, yeah, there were times when we got along great, [and] some times when we really didn't, and everything in between," he continued. "But ultimately, when you get on stage, most of the time, you forget everything and you just get lost in the music and you're having a great time in that moment, just making music and being a part of something that's bigger than ourselves and more meaningful than whatever you're going through. And you're there for hundreds or thousands or tens of thousands or whatever it is, that many people, that are there to be happy. And it's hard not to be when you're part of that."