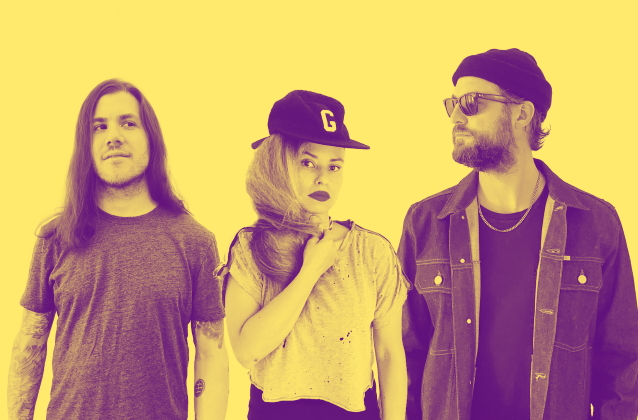 BURNING POOLS has been long in the making. Ginger and husband Kristopher Pooley had been demoing songs showcasing Ginger's penchant for empowering protest lyrics clothed in pop hooks, when they decided to reach out to guitarist Max Bernstein. He promptly added some tracks with a sub-octave fuzz permanently in the "on" position. Instantly, the three decided that Kris (a keyboard player by trade) would dust off his drum kit as this was not a synth operation — and a band was born.

BURNING POOLS' three members share a long list of studio and touring credits and collectively have worked with rock legends like Tom Morello, Siouxsie Sioux, Slash, Morrissey, Liz Phair, Scott Weiland, Tegan and Sara, and bands like JANE'S ADDICTION and WEEZER. They've also had their hands in the pop world, though it is clear that its influence is positively nil. Their unique brand of noisy power-pop with doomy riffs charts a different sonic course, harkening more to the loud drum and guitar squalls that Kris and Ginger experienced as newlyweds on SMASHING PUMPKINS tours.

BURNING POOLS' debut EP is a critique of the hierarchy of our value system. Ginger says: "It's nothing new for music to be a voice of criticism of our culture. That is the purpose of a lot of art. This is just my way of expressing my frustration with the priorities of modern society. Valuing money over everything, undervaluing women and people of color. Hopefully our songs make people who are of the same accord feel heard and supported. There is so much injustice in the world, we hope to be a part of the solution in some small way.”

Bands like BURNING POOLS are supposed to play shows — and to the list of the world's upended plans of 2020, we add the dream of taking these songs beyond streaming platforms to the stage where a power trio can actually be one in real time. For now, BURNING POOLS will be releasing singles from their forthcoming EP.