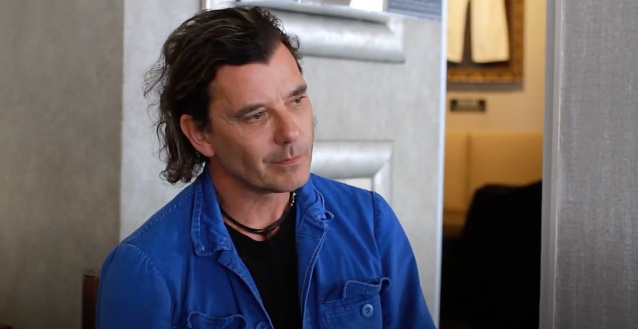 BUSH's GAVIN ROSSDALE: 'Nobody Wants The Singer In A Rock Band To Do A Solo Record'

In a new interview with Australia's Spotlight Report, BUSH frontman Gavin Rossdale, who released a solo album and created the side-project INSTITUTE during his time away from the band, was asked if his "comfort zone" is being part of a group or working as a solo artist. He responded (as transcribed by BLABBERMOUTH.NET): "Nobody wants the singer in a rock band to do a solo record — nobody; not even the singer in the band. I did that. I did INSTITUTE, which was meant to be a quick record; it took longer than it should have. And then I wanted the band to come back together. And they just didn't, so I did the solo record. It's nothing I really wanted. I don't like that. I mean, I do like some solo artists, but I think nothing beats a great band. A great band is a great band. And that's why I'm so happy to be in this band. And when I write and I work hard at the writing, it's for BUSH."

Less than two years ago, Rossdale told Kerrang! magazine that he had "regrets" about BUSH's nearly decade-long break. "It clearly diverted our momentum," he said. "But back then I was with Jimmy Iovine and Interscope, where the philosophy was, 'You've had a bunch of hits. You better have another hit.'"

Asked how sad he was that things came to a close with BUSH in 2002, Gavin told Kerrang!: "That was never meant to be a permanent thing. I had recently got married, and it was a weird time. I wanted to do the INSTITUTE record, which was meant to be a three-month thing, but it turned into a couple of years. And then I tried to get the band back together in 2008, when I did my solo record. I didn't want to go solo, but Nigel [Pulsford, guitar] didn't want to come back. And I never should have done a solo record. I never should have done the INSTITUTE record. I should have just kept on making BUSH records. But that's the way it goes. I begged the band to get back together, but Nigel and Dave [Parsons, bass] didn't want to do it, so I had to get some new guys in, and we've had the same lineup since."

The group, which reunited in 2010, has released four albums since reforming.

The singer said: "Roundtable are the exact partners I've been looking for to produce this project. They understand my vision and will help execute a compelling series in which we get to see behind the public persona of people we know and admire for their work.

"This show is about connecting more deeply with them, hearing their stories, walking in their shoes. It's hard to be surprised anymore, but the simplest surprises are the human revelations that occur over food and drink."