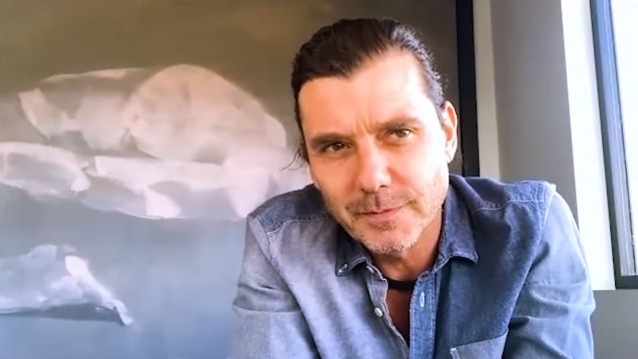 BUSH's GAVIN ROSSDALE Ponders The Custom Of Handshaking: 'Why Do We Do This?'

BUSH frontman Gavin Rossdale was asked by Radio.com in a recent interview if the coronavirus pandemic has increased his awareness of the potential public health risks associated with the custom of shaking hands. He responded (see video below): "To be honest, I was always slightly confused. I love meeting people; I do these meet-and-greets, but just shaking so many people's hands. It's such a funny thing, isn't it? A custom of having to touch each other. Why can't we say, 'Hey.' Why do we have to touch the whole time?

"I don't have issues, and I'm not weird about it, but you meet 150 people at a meet-and-greet every night — that's a lot of people, a lot of traffic, a lot of hands," he continued. "Why do we do this? Obviously, it used to be [that] you do that to show — back in the Middle Ages — [as a gesture of peace by demonstrating that the hand holds no weapon]. I totally get that. But people paying good money to come and meet you and take a picture of you, I'm hoping that they're not gonna [carry any dangerous weapons]; they're going through metal detectors, I guess. I know we're not a hip-hop band.

"I'm not a germaphobe, but there's someone in my band who's a super-germaphobe," Rossdale added. "He was always really worried about it and was always, like, fist-bumping. I don't really shake people's hands anyway, because I always get one person who's really over-enthusiastic and crushes your hand. So I go, 'I'm not a germaphobe, but the hand crush. Boom. [Extends fist] Nice to meet you.' Which is perfectly healthy."

In the western culture, hand shaking signifies a lot of things — it ends conflicts, it seals deals, and it shows respect.

While some doctors would be happy to see hand shaking disappear, it could be extremely challenging to end such a culturally ingrained custom.

According to the Los Angeles Times, the handshake custom is thought to have originated in Europe more than 2,000 years ago and is arguably more commonplace than anywhere else.

Rossdale is not the only famous rock musician who has publicly disavowed handshaking. Back in 2016, former MEGADETH guitarist Marty Friedman said that he didn't like shaking hands with people because it hampered his ability to play his instrument.

The Japan-based axeman, who was a member of MEGADETH's classic "Rust In Peace" lineup, told Metal Wani: "Yeah, I don't like shaking hands for a number of reasons, but it's not that I'm an asshole of anything. I'd much rather give someone a hug or pat 'em on the back or whatever."

He continued: "Shaking hands, if you're a guitar player, that's like my tool, and everybody's tool. And you get these big guys and they're very excited; they'll squeeze the crap out of your hand. And it's really kind of stupid. Guys come and they tell you that they've loved your playing for fifty years, or however many million years, and then they squeeze your hand so hard that you can't play guitar anymore. I just don't understand that. But, you know, it's a necessary evil, I guess. I just try to avoid it as much as I can."

Friedman added: "You play your instrument with your hands, so why not just bow like we do in Japan? I like that. And there's no germs. I mean, that's brilliant. But I love my fans more than anything, and if they must have a handshake, I give it to 'em. But when I'm doing things where I'm meeting two hundred people at a time, or a couple of hundred people every day, I definitely have someone prepare them not to shake my hand, because I've gotta go to work, and I can't do it. And it's really not because I'm an asshole; it's because I wanna play guitar the next day."

Other people who famously don't like shaking hands include President Donald Trump, Howie Mandel (who told People magazine in 2015 that he hadn't shaken hands in eight years) and Gwyneth Paltrow.

Last month, BUSH played two drive-in shows across Southern California to celebrate the release of "The Kingdom Deluxe Edition". The record features six bonus songs, including "Heroes", a special tribute to David Bowie, as well as live performances of the title track "The Kingdom" and hard-charging single "Flowers On A Grave", which went Top 10 on Active Rock Radio.