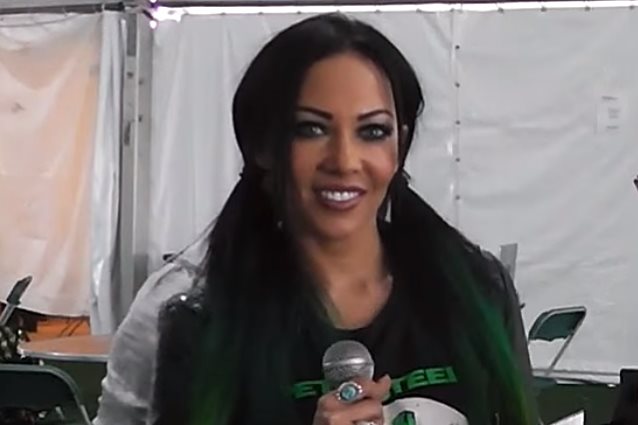 The rock world reacted in horror to the tragic events that occurred in Las Vegas on Sunday night (October 1),when a 64-year-old white male named Stephen Paddock opened fire from the thirty-second floor of the Mandalay Bay Resort and Casino on thousands of people attending an outdoor concert in a nearby parking lot. At press time, fifty-eight people had been killed and more than five hundred wounded, with Paddock reportedly taking his own life before a SWAT team burst into his hotel room.

Speaking to "The Roman Show", BUTCHER BABIES singer Carla Harveyoffered her views on the incident, saying (see video below): "Obviously, it's horrible. But this has been going on for years now, and all over the world, it's been going on forever — acts of terrorism. Any act like that, to me, is an act of terrorism, whether it's Muslim [or] whatever. Obviously, this is one sick person that wanted to leave his mark in a very horrific way.

Police have yet to determine a motive for Paddock's killing spree. He reportedly had as many as nineteen guns with him in his hotel room, while more weapons and thousands of rounds of ammunition were found at one of his two Nevada homes.

Jason Aldean was performing at the three-day Route 91 Harvest country music festival across Las Vegas Boulevard from the Mandalay Bay when the shooting erupted.

BUTCHER BABIES' third album, "Lilith", will be released on October 27 via Century Media. The follow-up to 2015's "Take It Like A Man" was produced by Steve Evetts (THE DILLINGER ESCAPE PLAN, SEPULTURA, SUICIDE SILENCE) and marks the band's recording debut with new drummer, Chase Brickenden, who replaced Chris Warner last year.