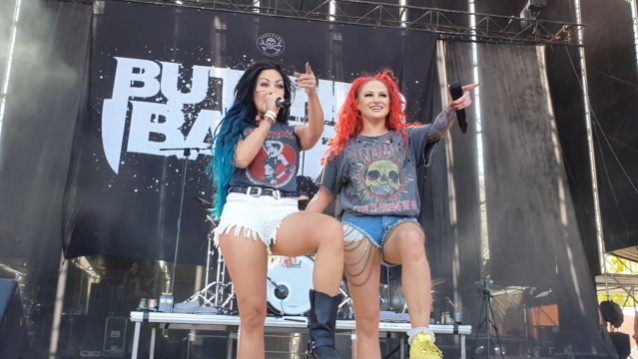 BUTCHER BABIES' cover version of rapper Saweetie's chart-topping single "Best Friend" will be released on October 28. A teaser for the song's accompanying music video is available below.

At this year's Brutal Assault festival in Jaromer, Czech Republic, Shepherd and Harvey spoke to Metalshop about the band's upcoming fourth studio album which was recently completed with producer Josh Schroeder (LORNA SHORE, KING 810) for a 2023 release. Heidi said: "We released a barrage of singles throughout 2020 and 2021, and we're gonna follow that up with a full-length album in 2023. But we're also going to finish out the rest of this year with a bunch of singles from that album. So we're very excited. We played one new song today from that album, called 'Best Friend'. And it's been going over really well. So we're very excited. I know it's been a while, but it'll be worth the wait."

Heidi confirmed that "Best Friend" will be included on BUTCHER BABIES' new effort.

Dedicated to best friends around the world, Butcher Babies presents to you a metal version of the hip hop banger, ‘Best Friend’, by the dynamic duo, @Saweetie & @DojaCat!
Out everywhere on Oct. 28th.
Pre-Save at this link to win some very special prizes!https://t.co/a8dwOkLBMxpic.twitter.com/V8DwrjuXTq