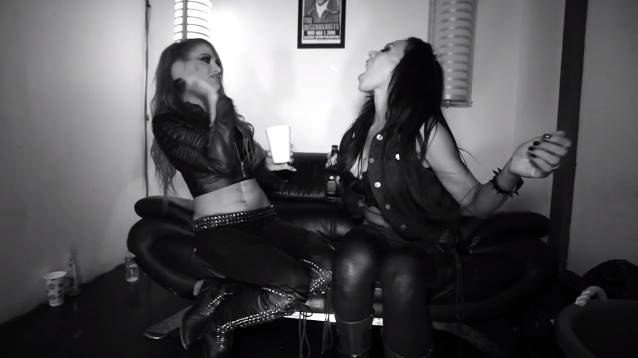 BUTCHER BABIES frontwomen Carla Harvey and Heidi Shepherd are featured in the latest installment of the the Musician Portrait Project.

The concept of the Musician Portrait Project is to display a moving portrait of various musicians.

A new video will debut every Wednesday.

Ultimately, the collection will be displayed in galleries, with each musician on their own individual video screen.

BUTCHER BABIES' debut album, "Goliath", sold around 3,300 copies in the United States in its first week of release to land at position No. 107 on The Billboard 200 chart. The CD came out on July 9, 2013 via Century Media Records.

"We were pretty pumped about [the chart numbers], because, you know, there was some hype, whatever, before the band before, but no one really knew what we sounded like before — obviously, before the album came out," Heidi said. "So as soon as we saw those numbers come in — 107 on the Billboard and No. 1 on Heatseekers — [we said to ourselves], 'We're doing something right. We're doing something right.'"

She added: "[When we first formed], we played a bunch of crappy shows in small bars, and we didn't know where we were gonna take this. We thought that at the very least we'd have some fun with our best friends."

In an interview with Maine Music News, Carla said: "We spent six weeks in pre-production and recording to make an album that gives us goose bumps every time we hear it.

"We all come from different musical backgrounds. I love old-school stuff like SLAYER, old METALLICA, I love PANTERA. [Our drummer] Chris [Warner], loves MARILYN MANSON. Heidi, my co-vocalist loves nu-metal. Henry [Flury], our guitar player, loves MESHUGGAH, and Jason [Klein], our bass player, loves death metal. So we managed to put all the different kinds of metal that we love into this album. It is so organic, and it sounds so good. We are getting tweets and Facebook messages all day long from our fans telling us how great it is. So besides what the critics say, what matters most is that we are proud of it and our fans are loving it."