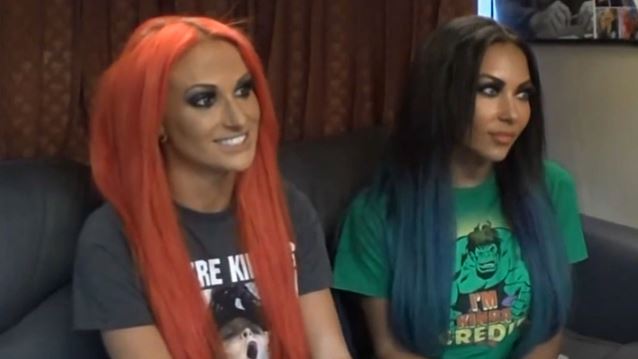 BUTCHER BABIES 'Had To Fight' For New Album Title And Artwork

"The Front Row Report" recently conducted an interview with BUTCHER BABIES frontwomen Heidi Shepherd and Carla Harvey. You can now watch the chat below.

Speaking about BUTCHER BABIES' forthcoming second album, which is due at the end of the summer via Century Media Records, Carla said: "What we've been telling people is that there's a little controversy surrounding the title, because both our label and our management absolutely hate it. [But] it's a title that we chose."

Asked if there is a central theme running through the lyrics on BUTCHER BABIES' upcoming CD, Heidi said: "It basically encompasses becoming the women that we are. And that's a real good clue."

As previously reported, BUTCHER BABIES has selected "Never Go Back" as the first single from its new album. An official release date for the single has not yet been announced, but the track is expected to arrive at radio next month.

BUTCHER BABIES have been performing another new song, titled "Monsters' Ball", on their current tour, to a great reception from the crowd.

Added Heidi: "But the thing is we're not ever gonna sacrifice who we are for that. What we're attempting with this is to bring back the metal and the aggression into radio. So we kind of… We merged the two worlds. And radio stations who have heard it so far are impressed and we're very excited for that."