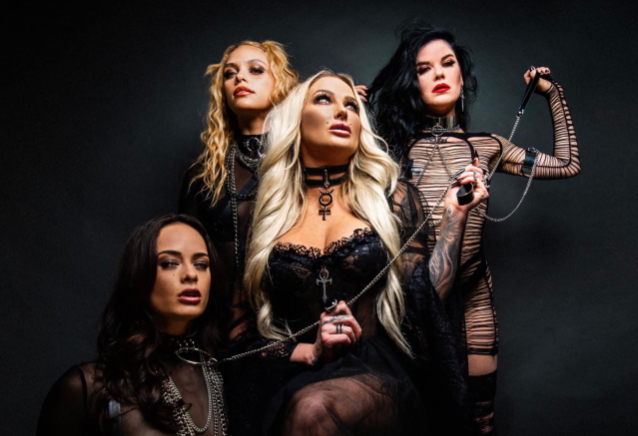 Los Angeles-based rock band GINA AND THE EASTERN BLOCK has teamed up with the "provocative rock 'n' roll dance troupe" Little Miss Nasty and BUTCHER BABIES co-vocalist Heidi Shepherd to record a cover of the KORN classic "Freak On A Leash". The NSFW music video for the track, directed by GINA AND THE EASTERN BLOCK vocalist Gina Katon and Jonathan Covert, can be seen below.

Shepherd has since taken to her Instagram to explain her decision to return to the "nipple tape" look for the clip, having previously performed topless with tape over her nipples in the BUTCHER BABIES' early days.

Heidi wrote: "Let's talk.. Over the past 14 years of my career, Ive grown into a woman in front of the whole world. Over those 14 years, Ive also seen the industry change. In metal, we've been told that its 'not metal' to embrace your feminine qualities but, Ive also seen the same women called ugly & gross when we dont. We've seen 'them' say that we women should tone down the bold but, then say that we need to be extra bold to play w the boys. THEY tell us (we all are) to be unique, then immediately pin us against & compare us to each other. We've seen them say that, 'people dont want to see women scream, we should sing & be pretty', then say that 'we're all clones' after THEY are the ones that shoved us in that corner to begin w.

"Ive felt the whiplash over the past decade of 'do this'.. Actually, 'do that'. And I have to be honest, I lost myself in all of that. Ive always been a girl to push boundaries and give [the middle finger] to the box that people have tried to put me in. As time has gone on, I feel like I steered away from the things that made me unique. Ive realized, that subsequently ended up in some pretty, little box with a bow that would make others feel comfortable.

"When approached to dive back into [nipple] tape for this music video, I admit, I was apprehensive cause 'OMG what would THEY think?'
Then @henryflury reminded me of how hard Ive worked. He reminded me that I came into this industry as a BAMF & I still am. He reminded me that I'm here to FUCKSHITUP! He reminded me that the female body is a goddamn piece of art & I should feel comfortable in the body that Ive worked so hard for. From surviving gastroschisis, to overcoming a debilitating eating disorder, to breaking my back, to NOW crushing the gym; I should feel grateful & proud of the body I have. We all should! I deserve to embrace my feminine qualities in any form I want, whether its nipple tape or turtlenecks. Cause we all have those moments of feeling like a badass, sexy woman, then also where we wanna rock our sweats and a baggy-ass tshirt. We should be empowered by both!

"So thank you @ginaandtheeasternblock for the reminder & the opportunity to rewind & reflect! So stoked about the video. THIS BITCH IS BACK! -SMD"

Regarding the music video, Katon commented: "Our version of 'Freak On A Leash' has so many of my favorite musical elements in it — it's dark, trippy, beautiful, weird, massive, and of course, nasty. When Marc (the producer) first played me the track, my mind was immediately flooded with ideas for the video. So the video is honestly the perfect reflection of the music. And it was such an honor to be able to work with Heidi on the song and the video. She's a true pro, an all-around great human being, and immensely talented. Heidi embodies the fierce darkness, power, and beautiful eroticism of this track perfectly. We also brought in some of the badass women from Little Miss Nasty to sing additional vocals on the song and to be the unbelievably gorgeous and powerful co-stars of this truly timeless video."

Shepherd stated about the clip: "Diving back to my roots with Gina and the talented ladies of Little Miss Nasty was the perfect reminder that we women are fierce as fuck and should be celebrated for how unique and beautiful we ALL are! Embracing our feminine qualities while attacking a classically sexy song felt like the perfect mix of confidence and empowerment that I needed to be reminded of. I'm honored to be a part of Gina's vision that touches on all senses."

Four years ago, Heidi said that she has no regrets about the period in BUTCHER BABIES' history when she and co-vocalist Carla Harvey used to perform topless with tape over their nipples, explaining that it was meant as an ode to PLASMATICS frontwoman Wendy O. Williams, who had a song called "Butcher Baby".

Asked in an interview with the "Talk Toomey" podcast if she looked back on the nipple-tape look as a good idea or a bad idea, Heidi responded: "I think it was a good idea. It was something that people were, like, 'What?' We did in our band previous to BUTCHER BABIES too, so it wasn't something new to us."

She continued: "It's an interesting question, because I think that, in a lot of ways, it definitely hurt how we've grown, but I also think that it was a message that we stood for. The people who didn't get it and it got lost in translation, well, now they know. But in Europe, it seems like more people understood, which kind of makes sense. But it seems like in the U.S., I'm, like, did people forget about [Wendy]? [Laughs] Does the metal community not understand this? But I don't think that it was a bad idea. I think it was something that I did and I'm proud of. I don't really hold any regrets. I think that in life in general, these situations build to the bigger picture, and I think that having had that past and where we are now, it's kind of a cool evolution of the band too. It's unique. We went from being these young girls, bouncing around in nipple tape, screaming hateful things into microphones, to women, almost a decade later, grown up in the industry, helped with this women's movement, if you will. And I think that that sort of thing helped me become the woman I am today."

Heidi said that the changes in BUTCHER BABIES' visual appearance in recent years happened naturally as the band toured around the world playing to thousands of impressionable fans.

"It's really interesting, because when we realized that young girls were looking up to us and we had a responsibility of being a positive role model, it really changed my life for the better too; I started living my life more positively," she said. "And I think you can see that in the evolution of our look; you can hear it in the evolution of our music. So, in that sense, I'm fucking proud of it."

Heidi also reiterated that BUTCHER BABIES' early image wasn't meant as a clever marketing ploy designed to ensure maximum exposure. "That was not ever anything that ever went through my mind: 'Oh, this will help us get attention.' Because I was in a band for a year prior to that, that I did that," she explained. "I didn't think that it would ever end up here. I didn't think that it would ever amount to anything. I just thought we were gonna have some fun playing some original music with our friends along the Sunset Strip, 'cause that's what we did before. The only difference was, before, it was five girls and [we were playing] covers. And that's the reason we created BUTCHER BABIES — to do original stuff." 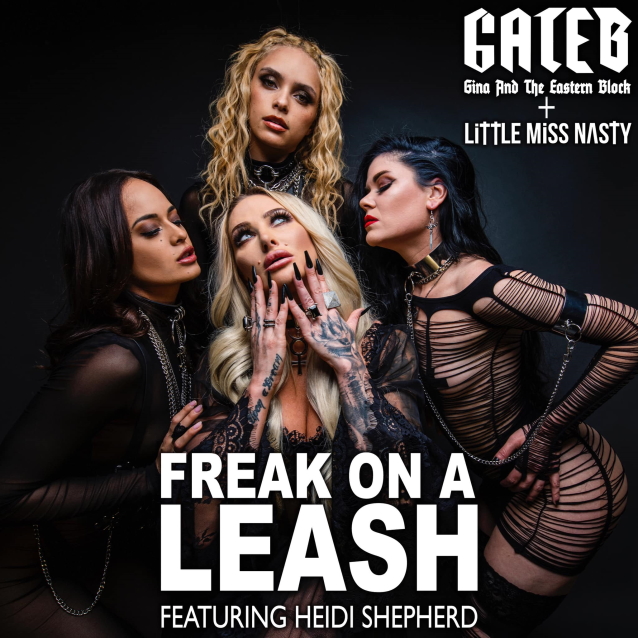