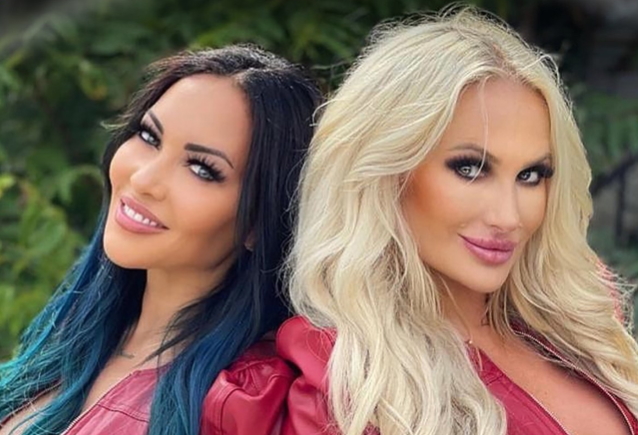 BUTCHER BABIES co-vocalist Heidi Shepherd spoke to "The Chuck Shute Podcast" about the band's upcoming fourth studio album which was recently completed with producer Josh Schroeder (LORNA SHORE, KING 810). She said (as transcribed by BLABBERMOUTH.NET): "We have an album that… well, it's gonna be a double album, really. That'll be coming out early next year. And we have a bunch of singles leading up to it. In fact, right before we jumped on with you, we were chitchatting about edits for a new music video. So we have a lot of stuff planned, a lot of really fun… For us, it's really fun and exciting, because we get to be so creative. We're gonna go do more music videos at the beginning of the year. And it's all exciting — it's all very exciting. I can't wait for other people to hear what we've created."

Speaking to Spain's EMP about BUTCHER BABIES decision to cover "Best Friend", Shepherd said: "It's basically a song about [me and fellow BUTCHER BABIES singer Carla Harvey]. 'Cause we've been best friends for so long. We were a band together prior to BUTCHER BABIES. It's a cover, and we figured we can't think of two better people to cover this song besides us. So it's fun."

Asked by Metalshop why it's better to release singles than a full-length album in 2022, Carla said: "I think we live in a time where people want things right now; they want new stuff all the time. And I also think that when you release a single, people have a chance to digest that song, fall in love with that song before they skip to the next one and the next one and the next one. We really like developing a song on its own, making a video for that song, telling the story of that song, because every song is special to us."