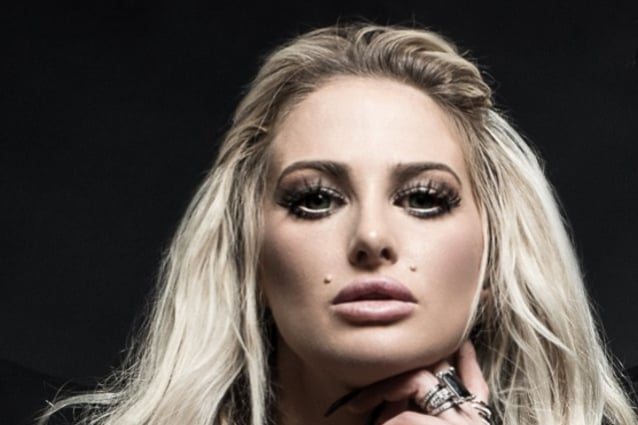 BUTCHER BABIES singer Heidi Shepherd has denounced what she calls "gross" acts of violence that occurred during protests around the United States over the death of George Floyd.

Although protests were largely peaceful as demonstrators marched in the streets from Los Angeles to New York, there were widespread reports of looting and confrontations with the police in cities across the country. A number of businesses were destroyed during the riots, which have spread to cities large and small. Curfews were enacted in more than 40 cities and the National Guard was summoned in at least 23 states.

"'Use your platform to speak out!' I've seen this over and over again while I've been trying to find the words to express how I feel. And, I'm sure I won't get it right.. But, Who am I? This isn't about me. This is about my fellow humans.

"I can't even begin to understand the level of anger, frustration and exhaustion that our beloved people of color feel. How could I? I'm a 30-something white girl from Utah whose worst experience was abuse and being bullied. These things can not even come close to know the reality of how hard it IS for our friends.

"I was raised to see all humans as equals. A good person is a good person and an asshole is an asshole regardless of skin color. There isn't anything that I can say to make things right. But, I can help fight the fight! I have immediate family that this does and WILL affect.

"I stand with and will fight for my family, my friends and my fellow humans who deserve basic human love without prejudice.

"I recently worked with several young adults (18-24) who used the 'n-word' constantly. Eventually, I had to put my foot down and ask why they felt as though they could just drop that word as if they had any idea where it came from. Their response, 'it's a fad word for their age group.' WHAT!? That's disgusting! On a basic level, we can at least respect each other and eliminate comfort with using such language.

"As I stated before, there are good people and there are assholes. The same goes for our police officers. The majority are good and feel an overwhelming love for their community. And, of course, there are a some assholes that don't deserve that badge. But, it starts at the basic level.

"Tell our children, young adults, etc the reason we don't use that n-word and why we should be respectful of how hard our people have fought to be heard and respected. The violence at hand is gross and not helping our voices.

"My beloved Los Angeles is in a state that we haven't seen since 1992. Can we make some moves to not let history repeat itself in the future? Can we show love to ALL of the human race so that we can overcome this un-just?

"I stand with the protesters and I agree with the BLM movement. We need justice for George Floyd and ALL of our fellow humans (because that's the race I see) who have been affected by our CENTURIES of prejudice.

"As I sit in my house and hear the sirens, choppers and loud booms from the city, my heart breaks. My hope, heart & love goes out to those thousands of peaceful protestors and police officers who have been working around the clock to try to keep the peace. Love you! To those inciting violence, eat shit!"

Floyd, a 46-year-old black man, was killed in Minneapolis by a police officer in an incident caught on camera. The officer, Derek Chauvin, kneeled on his neck for nearly ten minutes while Floyd was handcuffed. Chauvin has since been charged with third-degree murder and manslaughter.