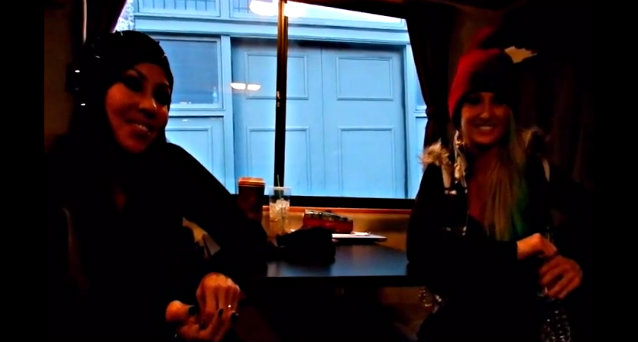 BUTCHER BABIES Interviewed By IN THE NOW MAGAZINE (Video)

In The Now Magazine's William Parks conducted an interview with the BUTCHER BABIES on January 8 at The Midland Theater in Kansas City, Missouri. You can now watch the chat below.

BUTCHER BABIES' debut album, "Goliath", sold around 3,300 copies in the United States in its first week of release to land at position No. 107 on The Billboard 200 chart. The CD came out on July 9, 2013 via Century Media Records.

In an interview with CrypticRock.com, Shepherd stated about "Goliath": "The album, as a whole, is very diverse. There is basically something for everybody. We all have different influences and everything is portrayed on this album. Jason [Klein, bass] loves death metal; Henry [Flury, guitar], in general, metal; I love nu-metal; and Carla loves classic metal. We all love every [kind of] metal but those are our favorite and those are where we came from. All our influences shine bright on this album. It's definitely a coloration of everybody's influences and everybody's love. We're all very proud of it in one way or another. There is something for everybody in it."

"I Smell A Massacre" video: