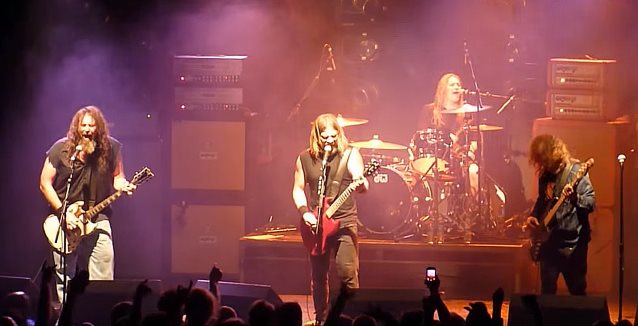 C.O.C.'s WOODY WEATHERMAN: 'For Us, It's About Having A Good Time And Trying To Create Good Music'

IndiePower.com recently conducted an interview with guitarist Woody Weatherman of CORROSION OF CONFORMITY. You can now listen to the chat in the YouTube clip below. A couple of excerpts follow (transcribed by BLABBERMOUTH.NET).

On the evolution of CORROSION OF CONFORMITY's sound:

Woody: "When we started out, we were really kids, man — just teenagers — and didn't really know what the hell we were doing. And we kind of still don't; we're just doing it. [Laughs] We just do what we like and what feels good. I think musically, other than just learning how to play the instruments a notch or two better through the years, we just stick with the same goals, man. I mean, we started out playing sped-up [BLACK] SABBATH riffs, and now we're playing slowed-down SABBATH riffs. [Laughs] You know, the occasional speed riff shows up, but… You know, I think if C.O.C.… If any of us didn't feel like doing it, or it didn't feel right, or we weren't having a good time, I don't think we would keep doing it. For us, it's about having a good time and trying to create good music."

On reuniting with guitarist/vocalist Pepper Keenan:

Woody: "Getting back with Pepper after a few years of not jamming those songs has just been amazing. I mean, being able to go out on tour and play the songs from those five or six albums that we've done together with Pepper, it's a blast. Getting on stage and people are singing along, and a whole new crop of fans, and, of course, a lot of the old guys, too, are showing up. Really, we're super lucky. We're a lucky band to be able to continue like this."

On the changes in the music industry over the years:

Woody: "People used to go on tour to support the albums that they would put out. And right now, it's kind of the opposite: people put out an album so that they can go on tour. [Laughs] People don't expect to make money off albums much anymore. It's sort of like a labor of love. You put it out there, but a lot of people just grab it off the Internet or whatever, and that's kind of become the norm. I think that's one reason vinyl has made such a big comeback — because people do wanna have stuff they can hold in their hands. So that's one bright spot in the world of music — vinyl has made a big comeback. Which is cool. I like to listen to my vinyl; I've got a big collection. [Laughs] But, yeah, things are different, man. But at the end of the day, man, I see a lot of kids, they're showing up to the shows and they're supporting bands. I think metal and hard rock and that whole genre in specific has such a loyal following that it's gonna be there a long time."

The four-piece version of CORROSION OF CONFORMITY — featuring Pepper Keenan on guitar and vocals — recently inked a deal with Nuclear Blast Entertainment. The band will enter the studio late this winter/early spring with longtime producer John Custer. Custer has recorded such C.O.C. classics as "Deliverance", "Wiseblood", "America's Volume Dealer" and "In The Arms Of God". The as-yet-untitled-album will mark CORROSION OF CONFORMITY's studio reunion with Keenan and the Pepper-fronted version of C.O.C.'s first full-length record since 2005. A fall 2016 release is expected.