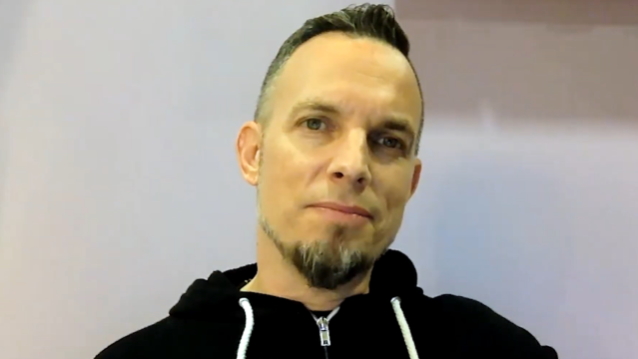 In a new four-minute video from SiriusXM, Mark Tremonti listens to 10-second clips of songs from CREED, TREMONTI, ALTER BRIDGE and more of his projects played backwards. Then he tries to guess which track was just played. Check out the results below.

In a recent interview with the 97.7 QLZ radio station, Tremonti revealed that ALTER BRIDGE's seventh album will be titled "Pawns & Kings". The follow-up to 2019's "Walk The Sky" — which is once again being recorded at Studio Barbarosa in Gotha, Florida with producer Michael "Elvis" Baskette, who has previously worked with SEVENDUST, MAMMOTH WVH and SLASH, among others — will arrive on October 14 via Napalm Records.

ALTER BRIDGE frontman Myles Kennedy released his sophomore solo album, "The Ides Of March", in May 2021 via Napalm Records.

Tremonti recently partnered with National Down Syndrome Society (NDSS) to release an album of Frank Sinatra covers titled "Tremonti Sings Sinatra". The LP of selections from Frank Sinatra's catalog will be made available as part of a new charity initiative created by Tremonti called Take A Chance For Charity. Proceeds from the album — scheduled for release on May 27 — will go to support NDSS and the work they do to advocate for and support individuals with Down syndrome and their families.