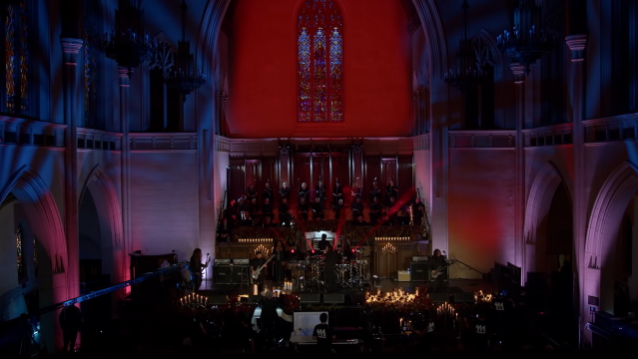 KORN celebrated the arrival of its new album, "Requiem", with a special record-release event on February 3 at the Hollywood United Methodist Church in Los Angeles, California. "Requiem Mass" saw the Southern California heavy music pioneers perform an intimate set in front of a 300 attendees.

A performance of the song "Worst Is On Its Way" from the "Requiem Mass" event can be seen below.

Tickets to attend the gig in person were made available at Amoeba Music's Hollywood location two days before the event on a first-come, first-served basis. Attendees were required to wear black funeral attire and had to provide proof of vaccination. KORN-branded masks for all attendees were handed out at the event. Attendees were encouraged to bring an item of remembrance to honor a loved one who has passed. Fans were able to leave those items in the casket as part of the ceremonial procession.

Announcing the show at the time, KORN said the event was to "gather in honor of the souls that have passed during these unprecedented times."

KORN guitarist Brian "Head" Welch and bassist Reginald "Fieldy" Arvizu have been sighted on numerous occasions sharing the gospel with fans at the band's concerts, praying for them in the lobbies of the venues where they perform.

"People think, 'I'm not good enough to have the Lord come into my life,'" Fieldy told CBN during an interview. "People have got to know, all you've got to do is know what Jesus did for you. He died for your sins, died on the cross and came back three days later. If you ask Him into your heart, it's for life. He's going to be with you forever."

KORN vocalist Jonathan Davis told Metal Hammer magazine about "Worst Is On Its Way": "Right now everything is going good, but always in the back of my head I'm just waiting for that next bad thing to happen. I thought it was an amazing way to end the record because it's all about me battling the darkness and coming out on top, but life is a never-ending loop and there's always more bullshit ahead."

In a recent interview with Midwest Beatdown, KORN drummer Ray Luzier spoke about the fact that "Requiem" consists of only nine songs, with just one being more than four minutes long. "We tracked about, I wanna say 16, 17 tunes or something like that," he said. "And there's a lot of records where if you think a song is a filler, it doesn't necessarily mean the next guy thinks it's a filler; they might like the songs that aren't singles better than the singles, so everyone's got opinions. But on this record, we tracked a lot. There's some that didn't make it [where] I was literally, like, 'Wait. How can that not make it? That's an amazing song.' But when you listen to 'Requiem' as a whole, I really believe that that's the best possible material we could pick at this time. It's like giving birth — there's your babies, your songs, and you want everyone to hear 'em and receive them as well as they possibly can.

"We just had such a great time making this record over COVID," Ray continued. "There was no rushing. We just went, 'Hey, let's meet in Bakersfield,' our California studio; Head and I live in Nashville. And we'd fly out there and just take it little by little. There was no, 'Oh, let's rush this [before] we have to go on tour.' It was, like, 'Hey, let's just make good music' and come back and listen to it and weed out the bad and really make the good stuff stick."