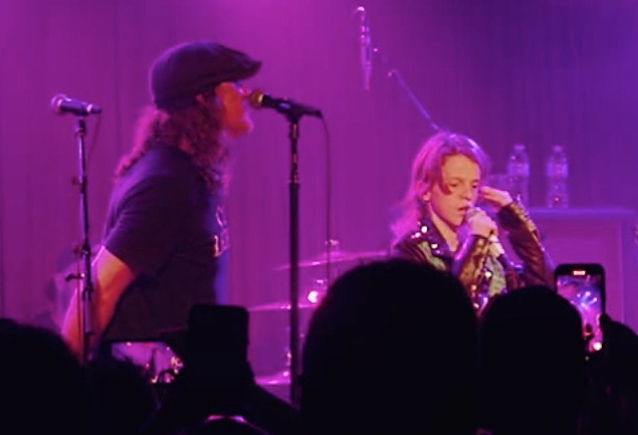 CANDLEBOX frontman Kevin Martin had the audience at the Crescent Ballroom in Phoenix, Arizona on its feet Thursday night (October 21) when he welcomed 12-year-old TikTok star Vedder Gabriel on stage to perform the band's hit song "Far Behind".

Martin and Gabriel had met previously on Instagram, which later led to a rockin' TikTok duet that caught the attention of thousands of fans. Martin quickly invited Gabriel on stage to perform the song, which led to a standing ovation.

Gabriel, who was named for Eddie Vedder, was only seven years old when he was plucked from the audience by Oscar-winning actor Jared Leto to join him on "Night Of The Hunter" at 30 SECONDS TO MARS's inaugural Camp Mars music festival in Malibu, California. He has since sung "Tennessee Whiskey" with Chris Stapleton, "Know Your Enemy" with GREEN DAY, "Dead And Bloated" with STONE TEMPLE PILOTS and "Last Time For Everything" with Brad Paisley, among others.

Asked in a 2018 interview with the Arizona Republic how Vedder manages to find himself on stage as often as he does, his father said: "He's fortunate. He's crawling up me higher to see and every cell in his body is screaming every word to every song."

His mother concurred, saying: "Even when he was that little, if he knew he was going to a concert, he would find the set list somehow and master the songs. He would listen to them and try to remember them."

Vedder himself explained it: "I learn all their music and all their songs and if they need me, I'm ready."

Gabriel is actually Vedder's middle name but it's become his stage name.

CANDLEBOX is currently wrapping up its fall tour in support of its latest album, "Wolves".