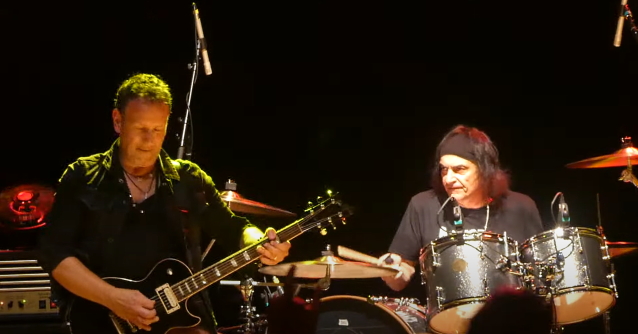 Fan-filmed video footage of LAST IN LINE's October 22 performance at Penn's Peak in Jim Thorpe, Pennsylvania can be seen below.

Formed in 2012 by drummer Vinny Appice, guitarist Vivian Campbell and bassist Jimmy Bain — Ronnie James Dio's co-conspirators and co-writers on the "Holy Diver", "Last In Line" and "Sacred Heart" albums — LAST IN LINE's initial intent was to celebrate Ronnie James Dio's early work by reuniting the members of the original DIO lineup. After playing shows that featured a setlist composed exclusively of material from the first three DIO albums, the band decided to move forward and create new music in a similar vein.

LAST IN LINE's debut album, "Heavy Crown", was released in February 2016, landing at No. 1 on Billboard's Heatseekers chart. Initially, the release had been preceded by tragedy when Bain unexpectedly passed away at the age of 68 on January 23, 2016. LAST IN LINE, honoring what they knew would be Bain's wish to keep the band moving, brought in Phil Soussan and committed to sustained touring in support of the album before beginning work on the follow-up release, 2019's "II".

This past June, Soussan spoke to Metal-Net.com about the progress of the writing and recording sessions for LAST IN LINE's third album. The LP is tentatively due in 2022 via an as-yet-undisclosed record label.

"I've been quite motivational with the band," Phil said. "I'm trying to keep things happening. We wanted to work on a few different aspects [during the pandemic]. I find things that we could do… We had some considerations with LAST IN LINE. I was trying to plan a streaming show. We were not able to do it because Vivian has some preexisting health issues and he's not really able to travel until we have some assurance that he's going to be healthy and able to do so. So, out of respect, we tried to do some other things. We have a TV show, which was like a Zoom chat show that we would do occasionally, and that was fun. And we also had to go about getting a new record deal — we were changing labels — so that's something we're in the process of doing, and we're getting pretty close now. But part of that was writing a third record. So we've been hard at work trying to write a third record and even record that third record while we've been in different locations around the world. And, obviously, this band works as a unit in every sense of the word, so it's a real handicap not being able to be in the same room as everybody and trying to make it happen."

In February, Appice told Metal From The Inside that former DOKKEN and current FOREIGNER bassist Jeff Pilson, who produced both "II" and 2016's "Heavy Crown", is not involved with the upcoming LAST IN LINE album. "We made a change," he said. "Actually, the guy who mixed the last record, Chris Collier — he's great; he's working with KORN — he recorded this record. And we're kind of producing it ourselves, between all of us.

Also in February, Soussan told the "Pat's Soundbytes Unplugged" podcast that the band was working on "a very, very special song that we're gonna be putting out fairly soon. I can't tell you any more than that, but it is something in the interim between us coming out with a new album, or releasing a new album, and now," he said. "So we'll do this as a video single."

As for the musical direction of the new LAST IN LINE material, Phil said: "The songs are another progression from the last album — the difference between 'Heavy Crown' and 'II', and now 'II' and whatever this next album is gonna be called; we don't know yet, by the way. But it's definitely evolved even more; it's gone into even more of an evolution, but we are always trying to keep the characteristics of LAST IN LINE there. I mean, you can't shake those things — you can't shake Vinny's drumming, you can't shake Vivian's playing. And I'd like to say the same thing about myself, and, of course, Andrew." 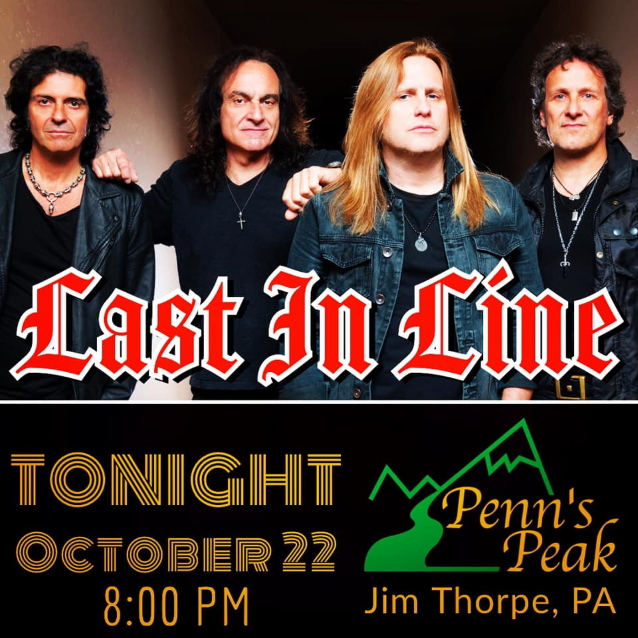